I'm just going to hit the highlights here. For a more in-depth beginner's guide, hop over to Malt Madness for the inside scoop.

First off, scotch whisky (always without an e) is made in Scotland. The Scotch Whisky Association fights assiduously (successfully and unsuccessfully) to prevent distillers anywhere else in the world from marketing spirits that might be confused with real scotch. So what is it supposed to be?

There are two different types of whisky that usually spring to mind when people think of scotch. Single malt whisky gets most of the adulation, with big names like Glenfiddich, Glenlivet, and Macallan. Breaking down the name, it refers to a spirit made from 100% malted (partially germinated to convert starches into sugar, then arrested with heat) barley that is fermented and distilled in a copper pot still at one distillery, then aged in oak barrels for at least three years. Even mixing in a tiny amount of another single malt will transform it into a blended malt, which is a mixture of single malts from different distilleries.

The second variety, which is what makes most of the money, is blended whisky. These include whiskies like Johnnie Walker, Dewars, and Chivas. Blended whisky is a mixture of single malt whiskies, usually from many different distilleries, that is combined with grain whisky. This produces lighter and more consistent whiskies that appeal to a broad range of drinkers. Grain whisky is simply any whisky made in Scotland with grains other than malted barley. Additionally, it is usually distilled in column stills rather than pot stills, which gives it a lighter flavor and body. As with malt whisky, grain whisky must be aged for at least three years. And most importantly to the distillers, since grain whisky is cheaper to produce, diluting malt whisky with it to make blends increases margins.

From now on I'm mostly going to focus on single malt whiskies, the superstars of the scotch whisky crowd.

Beyond the basic requirements, there are all sorts of factors that shape the final flavor of a whisky. These range from the location of the distillery, the source of the barley, the way that it is malted (by hand or in a large malting facility), whether the germinating malt is dried with hot air or burning peat, the type of yeast used, the length of time that it is fermented, how full the still is, how quickly it is distilled, the shape (distillers will sometimes try to have every bump and dent in a still replicated when they have new ones made) and configuration of the still (does the lyne arm rise or drop? does it have a purifier?), the type of condenser, where the cuts are made (foreshots, heart, and feints), how much the raw spirit is diluted before barreling, what type of barrel is used (ex-bourbon, ex-sherry, ex-port, other spirit or wine), how many times that barrel has been used before (virgin, first fill, second fill, etc), how long the whisky is aged, where it is aged (some whisky is aged on site, while others are trucked to centralized warehouses), to how much the whisky is diluted for bottling.

Which is to say that there are a lot of different things going on, so we'll start with a few. 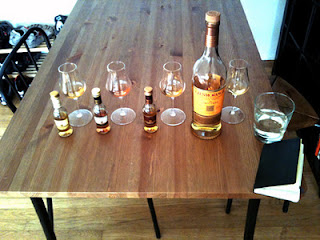 In my opinion, the best place to start with single malts is Glenmorangie Original. I originally picked it up on John Hansell's recommendation - he rates it as one of the best whiskies on the market today, which is no small thing given the breadth and depth of his experience. Personally, I think it's a great place to start for a number of other reasons. First, Glenmorangie uses very tall stills, which produces a fairly light spirit. This means that Original is not overly aggressive, while retaining good flavor density. Secondly, the spirit is aged entirely in ex-bourbon barrels for ten years, which both help to give it an approachable set of flavors and mean that it is uncomplicated by the various types of wine finishes available to distillers these days. It's relatively simple - there isn't a vast array of flavors to pick out of it - but what's there is very good. As an added bonus, it provides a stepping stone to investigating Glenmorangie's cask finished whiskies - these include sherry, port, and sauternes. These cask finished whiskies begin their lives in the same way as the Original, aged for ten years in ex-bourbon barrels, before being re-casked for an additional two years. This means that they are fairly comparable - they're all built on the same foundation, so you can look for differences to understand what the various casks do to the whisky. These can be picked up inexpensively either by grabbing one of Glenmorangie's Discovery packs, which includes a full bottle of the Original alongside three miniature bottles of their cask finished whiskies, or the Glenmorangie Collection, which has four 100 mL bottles of the Original and the various cask finished whiskies. Either of these should be under $40.

So where to go from that beginning? There are a number of different axes to explore.

Probably the most important is the different ways that sherry can be introduced into whisky. Sherry was historically sold by Scottish merchants who imported casks of fortified wines from the Continent to make the rough local malt whisky more palatable by aging it in the empty wine casks after selling their original contents. There are a number of different strategies for aging scotch whisky in ex-sherry casks. One, as mentioned above, is cask finishing, where whisky that was previously matured in ex-bourbon casks is transferred to ex-sherry casks to absorb some of their flavor. Glenmorangie's Lasanta is one example, along with Balvenie Doublewood. Alternatively, whisky from ex-bourbon and ex-sherry casks can be married together. This is the method distilleries like Aberlour, Bunnahabhain, Bruichladdich, and Arran use for their standard expressions. Last, but not least, whisky can be aged in ex-sherry casks from day one. This method is used by distilleries like Macallan, Glenfarclas, and GlenDronach. Any one of these would be a fine place to start your exploration.

The second major factor is peat. Both maligned and loved, peat originally found its way into scotch whisky because Scotland doesn't have enough trees. It does, however, have a lot of peat. And peat could be burned to provide the heat to arrest the germination of malted barley, preparing it for fermentation. During the 19th century, coal became more readily available, so peat slowly shifted towards being something that was used to produce a particular character in the whisky, instead of being a necessity. While peat is most closely associated with whiskies produced on the island of Islay, peated whiskies are currently being produced in almost every corner of the country. While the smoky, vegetal flavors of peat aren't to everyone's liking, there are ways to dip your toe in the pool without jumping straight to notorious heavyweights like Laphroaig or Ardbeg. A good place to start would be something like Clynelish 14 or Highland Park 12. Both start off with about 1/2 to 1/3 the amount of peaty compounds found in the Islay bruisers. This means that there is some smoke, but it doesn't overpower the other elements of the malt. Stepping up a notch, check out Springbank 10, Bowmore 12, Talisker 10 or Caol Ila 12. All of these are 'moderatedly peated', with about 50-60% of the intensity of the big boys. However, if you really want to go all out, Ardbeg 10, Laphroaig 10, BenRiach Curiositas, or Longrow CV might tickle your fancy. While the peat wars have raised the maximum, these are all still very firmly in the peaty camp, almost billowing with smoke.

Hopefully all of this hasn't been too overwhelming. There are many more features to explore, but these should give you some places to begin you're journey. It's an amazing place given that everything begins with some partially sprouted grain, but from those humble begins scotch can take on an almost infinite variety of flavors.
Posted by Jordan at 8:12 AM