Tucked away in the northeast corner of the island of Islay, Bunnahabhain has been cranking out that rarest sort of Islay whisky - unpeated single malts - since 1883.

The distillery is just up the road from another remote Islay distillery, Caol Ila. While seemingly inaccessible these days, when they were constructed in the 19th century it was a very reasonable location, as most goods were shipped by water rather than road. Bunnahabhain was built on a nice harbor that is sheltered from the fierce Atlantic winds that buffet the other side of the island, which meant that the distillery could bring in malt and ship out whisky via their own pier. Additionally, the distillery had a good water source in the form of the Margadale spring, which was piped down from the surrounding hills directly to the distillery.

Construction of Bunnahabhain began in 1881 (the same year as another Islay distillery, Bruichladdich) during the late 19th century whisky boom, with production beginning two years later. Founded to provide malt whisky for the burgeoning blended whisky trade, it sought to emulate the success of Caol Ila, which had been built several decades beforehand. Coincidentally, Bunnahabhain also spent most of its first century producing peated malt whisky, with the peat coming from the nearby Margadale Hill. It was only in 1963, during a major expansion of the distillery, that they switched to producing almost exclusively the unpeated malt whisky that they are now known for. Since then there have been experimental runs of 28 PPM malt in 1991 and 38 PPM malt in 1997, with more regular distillation of 38 PPM malt beginning in 2003. That expansion also provided Bunnahabhain with the largest potentially capacity of any distiller on the island. They are currently topped by Caol Ila only because the distillery is not being run at full capacity.

Most recently, Bunnahabhain passed from the ownership of the Edrington group (owners of Macallan and Highland Park) to Burn Stewart (owners of the Tobermory and Deanston scotch whisky distilleries, as well as Angostura bitters, Belvedere vodka and Thomas Hine cognac). The latest owners have brought about some major changes at Bunnahabhain, mostly notably the reformatting of their whiskies to be bottled at at least 46.3% ABV and without chill filtration. This has earned them plaudits from whisky reviewers and helped to raise the profile of the distillery from its former obscurity. 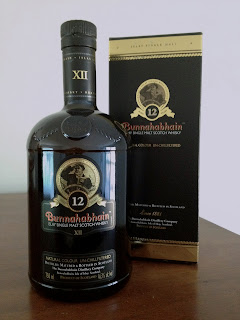 Nose: oloroso sherry presence is rich but not overpowering, malted barley, bittersweet fudge and mocha, roasted cacao nibs or coffee beans, walnuts, a hint of woodsmoke, maritime air, fresh fruit esters (pear?). Adding a few drops of water makes the nose a bit more gentle, with a bit of a shift towards the malt component, along with a darker and less sweet sherry note, and something a little bit floral.

Taste: begins with gentle malt sugars, then segues into very rich sherry sweetness - properly balanced, followed by mocha bittersweetness, stewed fruit, and black pepper mid-palate, somewhat astringent oak tannins at the back. After dilution, the mouthfeel becomes a bit thicker with more malt sugars, while the pepper, sherry, and oak retreat a bit, shifting the balance.

I've got to say that this has become my new favorite sherry-driven single malt. I originally bought it on a bit of a whim, because I was able to pick up a bottle for the very reasonable price of $45 (it's ~$60 here in Oregon). I'm quite glad that I did, since the contents are just so good. It combines a lot of what I enjoyed about Aberlour 12 with a bit more heft and a distinctly Islay character. Additionally, like Aberlour, I really like what comes out of marrying together bourbon cask and sherry cask matured whiskies, as opposed to a cask finish. The sherry is a strong presence in the final product, but the malt and vanilla from the bourbon cask portion isn't completely obscured, providing a balance that is sometimes lacking in cask finished whiskies. The maritime component also adds some very nice complexity, giving it an edge over the competition.

I have heard others complain about it being too oaky and astringent, but for me that's actually a plus. I really like that the overall profile is bittersweet rather than the overriding sweetness that often comes with sherry. But, you know, your mileage may vary. I will happily be drinking this whisky in all its higher proof, non-chill filtered glory.
Posted by Jordan at 8:10 AM