I snagged this drink from Ted Haigh's Vintage Spirits & Forgotten Cocktails. The drink first appeared in Patrick Gavin Duffy's The Official Mixer's Manual in 1934. That suggests that it probably came out of Prohibition, when lots of drinks were developed to hide the taste of bad spirits. While I'm using finer ingredients than what would have been available at the local speakeasy, it still manages to hide an awful lot of whiskey. 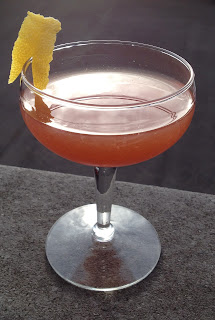 Combine all ingredients, shake with ice for six seconds, then strain into a chilled cocktail glass. Garnish with a lemon twist.

The nose is full of grapefruit with hints of lemon oil from the garnish and there is a bit of rye and raspberry underneath. The sip begins with mildly sweet grapefruit, which grows towards mid-palate. The rye and raspberry rise alongside. The finish is all raspberry and rye grain.

This drink definitely fits the Prohibition mold. With that said, unless you want the whiskey to hide even more, I wouldn't try substituting bourbon into this cocktail - it probably won't be able to hold its own. If Rittenhouse can barely punch through, no bourbon short of George T. Stagg is going to make much of an impression. Either way, it's either an easy drinking cocktail (build it over ice and dilute it with a squirt of soda water for something a bit snappier in the summer) or a good way to ease someone into rye whiskey.
Posted by Jordan at 7:48 AM