This is another cocktail from Imbibe's rum feature in the Jan/Feb 2010 issue. The drink was invented by Maksym Pazuniak of Cure in New Orleans, who named it after the Haitain Vodou loa who makes rivers overflow their banks.

For a slightly different take on this drink, you should check out Cocktail Virgin. 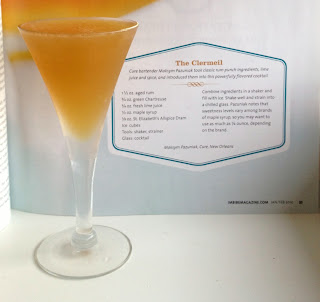 Combine all ingredients, shake with ice, then strain into a chilled cocktail glass.

The nose is dominated by the Chartreuse, which gives is a rather savory aspect, with an undercurrent of rum and maple syrup. The sip begins lightly, with sweetness, lime, and herbal notes growing stronger mid-palate, then slowly fading out with a bit of spice from the allspice dram. The rum plays more of a supporting role, giving the flavors a certain roundness.

I made the drink with the last of my bottle of Ron Matusalem Gran Reserva. While an excellent choice in many applications, it felt overwhelmed by the green Chartreuse. As Fred noted, even El Dorado 12 Year can get beat out by the herbal liqueur, so maybe only something like a Jamaican rum would really be able to hold its own. Another alternative would be switching to the lighter and sweeter yellow Chartreuse and easing back a bit on the maple syrup. That could let the rum shine a bit more. Either way, this is a very nice tiki-ish take on the Last Word format.
Posted by Jordan at 11:09 AM