It's that time of the month again - Mixology Monday has rolled around. This month's event, hosted by Scott Diaz of Shake, Strain & Sip, is Crass to Craft. To summarize -


"The evolution of the cocktail has been a wondrous, and sometimes, frightful journey… But with all this focus on “craft” ingredients and classic tools & form, it seems we have become somewhat pretentious. The focus on bitter Italian amari, revived and lost ingredients such as Batavia Arrack or Crème de Violette, the snickering at a guest ordering a Cosmopolitan or a Midori Sour has propelled us into the dark realm of snobbery… Remember, the bar was created with pleasing one particular group in mind: the guest. As such, this month’s MxMo theme… will focus on concocting a craft cocktail worthy of not only MxMo but any trendy bar, using dubious and otherwise shunned ingredients to sprout forth a craft cocktail that no one could deny is anything less. There are a plethora of spirits, liqueurs, and non-alcoholic libations that are just waiting for someone to showcase that they too are worthy of being featured on our home and bar shelves. So grab that bottle of flavored vodka, Jägermeister, cranberry juice, soda, neon-colored liqueur, sour mix, or anything else deemed unworthy of a craft cocktail, and get mixin’!"

Thinking about what's been languishing in my booze collection, I pawed some spirits out of the way to find two bottles of amaretto hiding at the back of one shelf. While little used now, amaretto was my unglamorous introduction to mixology. Near the end of college I loved Amaretto Stone Sours - 1:2:2 amaretto, orange juice, and neon yellow sour mix. Even with bottom shelf amaretto (seriously, I think the bottle cost $5), the sheer artificiality of the combination somehow just came together perfectly.

But those days passed and the amaretto wasted away, rarely to see the light of day. Trying to think about what to do with it, I remembered Jeffrey Morgenthaler's post extolling the virtues of his Amaretto Sours. While I'm a bit low on cask-strength bourbon, I do have a lot of high proof rum. So I decided to take it in a slightly tiki direction. 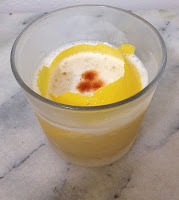 Combine all ingredients, dry shake, then shake with ice and strain into a chilled rocks glass. Garnish with a long strip of lemon peel and a few drops of Angostura bitters

The nose holds just a bit of funk from the rum and some woody/spicy notes from the bitters on top of the foam. The sip begins in a balanced fashion, perched between sweet and sour, slowly segueing through almond notes from the amaretto, Jamaican rum funk, eggy creaminess, and finishing with very mild bitterness.

While retaining the basic structure and character of the Amaretto Sour, I think this version manages to make things just a bit more interesting. The rum, bitters, and falernum are present without overwhelming the amaretto and lemon juice. The egg white acts as a good integrator, smoothing over the cracks between the other flavors. If you're sensitive to egg flavors or just feel weird about raw egg whites, you could back off a bit an use a teaspoon instead of a tablespoon, or even just omit that entirely. Either way, it's a hell of a drink.

Thanks again to Shake, Strain & Sip for hosting this month's MxMo. I look forward to seeing what other drinks people have hauled up from the depth of the bottom shelf.
Posted by Jordan at 8:06 AM