I was lucky enough to both taste and grab some samples of these whiskies from the PDXWhisky tasting  back in April. Since then I've sat down a couple of times to do more detailed reviewing.

Balblair was founded in 1790, making it one of the oldest distilleries in Scotland that is still in operation. Located just north of the Speyside region and near Glenmorangie, it languished in obscurity until being revived by investment in the early 2000s. In 2007 it took the rather radical (for the scotch whisky industry) move of shifting all of their bottles to vintages rather than standard age dates, emphasizing how the spirit can change from year to year rather than blending to produce consistent products. With that said, Balblair has still stuck with fairly standard ages, putting out 10-18 year old bottles in their core range, with additional older vintages that command significantly higher prices.

Here I'll look at two different whiskies that are roughly the same age at 10-11 years old, putting them at the younger end of the spectrum. 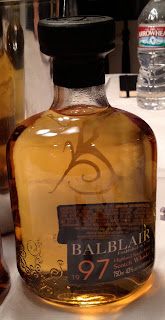 Taste: very fresh flavors, malt and floral notes throughout, sweet and sour fruit (apples, berries) and malt up front, becoming bittersweet mid-palate, with fairly hefty oak, pepper, vanilla, grass, and fruit (apples, pears, stone fruit). After dilution, there is caramel and raisin sweetness up front, then bitter herbs (bay leaf?) and oak over malt plus a bit of soap from the mid-palate back, some floral notes linger, and there's light pepper.

Bottled in 2007 at 43% as one of the inaugural releases of their vintage line, this malt seems to do best undiluted. While experiencing it with a bit of dilution may be educational or interesting, the trend towards bitter herbaceous notes and oak tannins as well as a lack of punch just rubbed me the wrong way. Neat, it was a wonderful display of malt, floral, and vanilla notes in almost perfect harmony with oak tannins from the first-fill casks, which hit me just right. Balblair has recently put out a second release of the 1997 vintage, with several more years under its belt. I'd be very interested to try it, to see how well the malt has held up to the extra time in oak. With the proper balance of spirit and cask, I can imagine it being a stunner. 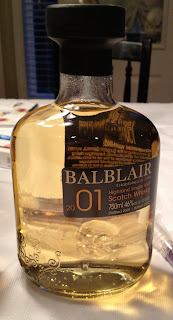 Taste: clean sweet malt, vanilla, and caramel throughout, a touch of sherry, big pepper, herbal/vegetal notes, and a healthy dose of oak tannins mid-palate and back, vanilla, raisins. After dilution it becomes somewhat chewy and buttery (diacetyl), with what seems like stronger sherry influence, trending towards bittersweet, very rich and thick well-polished oak, bigger spice (cinnamon), nut, and fruit notes, plus a bit of coffee.

This whisky was bottled in 2012 at 46%, making it the fourth release (I think) in Balblair's entry-level range. This one doesn't really do it for me. While it did improve dramatically with water (maybe 43% is the ideal for young Balblairs?), the feint-y notes persisted and rather threw off the nose. However, remembering back to the first time I tasted it, it was a lot better after drinking some peated whisky, when the sweeter malt notes seemed more apparent. Maybe burning out the receptors for vegetal/phenolic notes in the nose lets the underlying malt shine? I'm not sure, but I'd give this one a swing and a miss. I can imagine it improving with time, so I'll keep an eye out for future releases of this vintage in another two to three years, when the new make elements may have given way to more heft and balance.

Comparing these two whiskies goes to show how hard the master blenders at scotch whisky distilleries have to work to put together consistent releases year after year. Each of these expressions must be a combination of many barrels, yet they still have very distinctive characters. In some ways I feel like this is a nice change of pace, as it edges towards the variety of single barrel expressions without as much of the associated costs. On the flip side, every vintage is going to be different, so there's no guarantee that you will like future vintages. There is a clear familial resemblance between the two, but I wouldn't be surprised if I was the only person who had polarized opinions about these two whiskies. With that said, I'm definitely going to seek out more releases from Balblair. I really enjoy the lighter malt-focused, floral house style and would really enjoy seeing what it becomes with a bit more age.
Posted by Jordan at 8:08 AM