Lochside is a now long-gone distillery that was located on the east coast of Scotland north of Dundee, in the same area as Glencadam and the also defunct North Port/Brechin and Glenesk distilleries.

The distillery had a very short and somewhat inglorious life, beginning in 1957 when a former brewery was converted into a grain and malt distillery by MacNab Distilleries. It passed through a couple of different hands, before landing in the lap of Allied Distillers in 1992, who promptly shut it down. The buildings remained for another dozen years, before it burned down in 2004. Stocks from this distillery appear to be almost gone, but I was lucky enough to try a dram of Lochside from one of the last years of their production at the Highland Stillhouse. 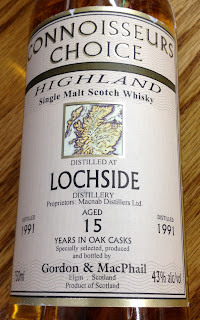 Taste: flat, noticeable alcohol heat, lightly malty, pepper, sweet with a sour edge up front, fairly tannic, light peat near the back of an industrial/organic quality, bittersweet fruitiness (ripe berries) over everything. After dilution the palate becomes a bit lighter and more balanced, with less fruit (except up front), more creaminess, the tannins come in later, and some sour malt throughout.

Finish: tannins, light malt, a hint of fruit and peat. After dilution it becomes very strongly tannic, with a big hit of black pepper, and a somewhat abrasive quality.

This is a very odd whisky. The nose got my hopes up, as I found it to be rather enjoyable, but the palate just left me cold. It felt rather disjointed, never quite settling into a comfortable groove. Reduction down to 43% probably doesn't help, but I'm not sure if more oomph is what it really needs. There are a few bottles left in Oregon, which tempt me to dig into it and see if there's more to be found, but I already have so many whiskies that are clamoring for my attention that I'm not inclined to bother. Sure, there's the appeal of drinking something from a Lost Distillery, but this one doesn't exactly excite me. They can't all be winners, though if the Malt Maniacs' scores are to be believed, this is an aberration in an otherwise solid line-up of IB Lochsides. I'll have to keep an eye out for others, to see if the distillery's standard output was better.
Posted by Jordan at 8:26 AM