Teaninich is one of the distilleries in Diageo's mega-stable that rarely sees the light of day, primarily going into their blends.

The distillery was founded in 1817 by Hugh Munro, on his estate. It passed through a number of owners and leaseholders during the 19th century, until it landed in the hands of the proto-Diageo DCL in 1933. Since then the distillery has been progressively expanded, usually by adding new buildings alongside earlier ones. The first expansion was from two to four stills, then from four to ten stills, until the whisky crisis of the 1980s led to the whole place being shut down. The newer chunk was revived in the early 1990s, and the original distillery was destroyed, leaving Teaninich with the six newer stills. Most recently Diageo announced an enormous expansion on the site, which will create a new *sixteen* still plant at a cost of £50 million (this exceeds their already vast site at Roseisle, which cost £40 million). What will happen to the older six still plant when the next down cycle of the whisky market occurs is anybody's guess.

In a sense I've already tried some Teaninich before, as it's a component in Compass Box's Oak Cross blended malt. This made me want to try single malts from the component distilleries, to get a sense of what they contributed to the whole. Luckily the Highland Stillhouse had a bottle on hand. 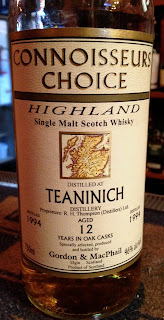 Taste: rich but not overly assertive creamy sherry throughout, sweet and sour with blackberries up front, vanilla comes in mid-palate, bitter chocolate, pepper, and oak near the back. After dilution there is more malty sweetness throughout, with more black pepper, meatier/drier sherry, more creaminess, and a little peat at the back.

I really enjoyed this whisky. It's bottled at a quite respectable 46% and there's great balance between sherry and malt, with just a bit of peat for spice. I could definitely see how it fit into the Compass Box Oak Cross blended malt, bringing some creamy sherry to the table. It's a shame that Teaninich isn't bottled as a single malt more often, because it fills a nice niche similar to Bruichladdich. As full bottles of this G&M expression are still available, I'd be really tempted to pick some up if it wasn't over $80 here in Oregon, which just seems silly for such a young single malt. Still, highly recommended if you can find it.
Posted by Jordan at 11:36 AM