This trip was roughly a year in the making - sometime around mid-2012 I realized that not only did Icelandair offer more or less direct (you have to change planes in Iceland, but all of their America -> Europe flights require that) and rather reasonably priced (~$1000 round-trip) flights to Glasgow, but they only charged ~$50 each way to check a boxed bike. Combined with my growing interest in single malt whisky, this got the wheels spinning in my head. Could I do a bike tour visiting distilleries? 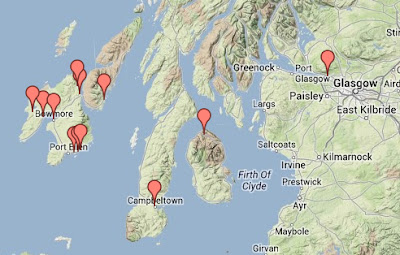 Conveniently, quite a number of my favorite distilleries are located in a fairly close cluster around SW Scotland. After plotting out the distances, it appeared that I wouldn't have to do more than a few dozen miles of riding in any one day. That discovery started to get me excited - while I've always been a decent cyclist, the idea of riding a lot of miles carrying a lot of gear and having to navigate unfamiliar terrain were fairly daunting, so I didn't want push myself too hard. It was supposed to be a vacation, after all.

Buying the tickets really committed me - this was going to be the first time I had traveled internationally by myself, so there were a lot of unknowns. To begin with, my passport needed to be renewed, a decade after my last international trip (this turned out to be a completely smooth process).

Next up was trying to schedule everything - there were a few fixed points, since a number of distilleries only offered their in-depth tours on particular days of the week. Making everything fit together was a bit like one of those logic puzzles we had to solve in math class - you were given a few pieces of information and forced to make everything else conform to it. Eventually I made everything fit together in a form that seemed doable. There were a few hiccups, like Laphroaig being closed for the weekdays when I would be staying in Port Ellen, but the compromises were tolerable.

After that, I had to make sure I had somewhere to sleep every night. Again, since this was a vacation, I wasn't particularly interested in camping. Given the high chance of rain and the hilly terrain, a warm bed and a hot shower at the end of every day felt like a necessity. Thankfully, while there were a few places that it was hard to nail down (Port Ellen was surprisingly busy for early September), I got everything settled without too much trouble or having to commit to spending a lot more money than my ideal.