Scotland 2013: Auchentoshan and Traveling to Arran

My first full day in Scotland... I woke up bright and early, reasonably well-rested and ready to head off into the unknown. I had two goals to accomplish: ride ~15 miles to Auchentoshan distillery for a tour, then get to Lochranza on the Isle of Arran by some combination of train, ferry, and biking.

After a smallish breakfast, I set out to get to my 10 AM tour of Auchentoshan. I had a few different options for how to get there, but went with more or less reversing course from the day before - down Byres to the river, then taking the cycle route paralleling Dumbarton until it petered out around Clydebank. At that point I more or less threw up my hands and got on Dumbarton, taking ease of navigation over the threat of cars not noticing me on a relatively busy road. I overshot the turn to Mountblow Road by a bit, but thankfully caught the mistake fairly quickly and got myself turned around. Thankfully I was able to ride the sidewalk along the A82 instead of having to get into traffic, then quickly ducked down the private road to Auchentoshan with plenty of time to spare. 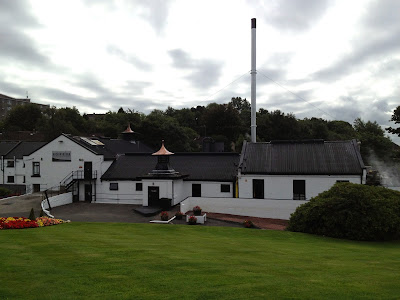 The man at the gate was quite nice and promised to watch out for my bike if I propped it up by his shed. From there I wandered about the distillery buildings for a bit and eventually found my way to the visitor center. 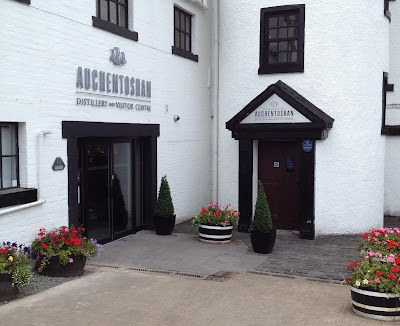 There was a fairly large group of men waiting for a private tour, but I lucked out and there was only one other couple waiting around for the 10 AM standard tour. Rose greeted the three of us and took us off to see the Auchentoshan process. Rather than saddle you with the details, I'll point you towards Auchentoshan's very detailed website that covers most of what you'd want to know. 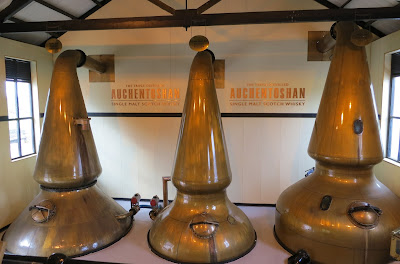 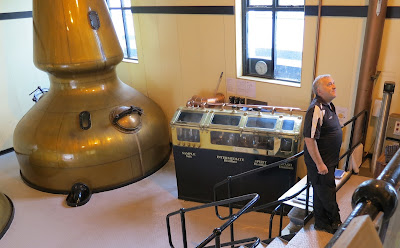 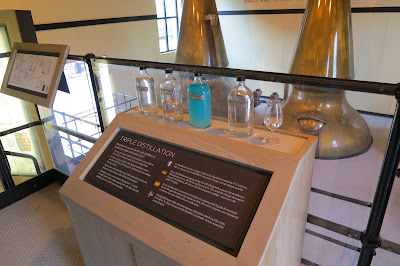 There are a few tidbits I can add, such as the picture right above. That middle bottle is blue for a reason - the foreshots, which contain lots of nasty chemicals like methanol and acetone, take so much copper sulfate out of the stills that it colors the liquid. You can also see it in the spirit safes as a blue-green patina around the chutes. This is why stills wear out - the copper is literally being stripped out of them molecule by molecule every time they're used.

After seeing their production process, we took a quick look through a dunnage warehouse. Auchentoshan only ages some of its spirit on site, with the rest going to the parent company Morrison Bowmore's Springburn Bond site in Glasgow, which is also where all of their whisky is bottled. A few more interesting things I learned during the tour:

Auchentoshan proofs all of their whisky with distilled water, so there's none of the "pure Highland/Island/whathaveyou water" imparting flavor directly to their non-cask strength bottles.

When their coopers rework ex-bourbon barrels into hogsheads, they put new oak heads on the casks to impart extra flavor, making an interesting hybrid of new and refill oak. This was also the first place that confirmed the fact that most sherry casks used in the whisky industry are now made custom - casks tend to be built new, seasoned with sherry destined for vingear, then emptied and shipped to Scotland. So despite all the talk of 'top-quality sherry casks' and whatnot, very few of them will have been filled with top of the line sherry. Ultimately this makes sense, since sherry bodegas are less interested in wood extraction than scotch whisky distillers. Sherry primarily gains flavor via oxidation, so the bodegas would rather use very old casks without a lot left in the wood to extract. Scotch whisky distillers want more active casks that will impart a lot of flavor to the spirit. However, this does cost a lot of money - Rose quoted a price of ~£500 for a custom sherry butt.

After our tour through the warehouse, we dropped into the tasting lounge, where Rose poured us samples of various Auchentoshan whiskies. Because we were such a small group, she actually offered to let us try whatever we wanted from the core lineup, rather than just the standard Three Wood pour. Having tried the 12, 18, and Three Wood earlier this year, I went for the 21 Year. Since I didn't have proper glassware I wasn't able to get detailed tasting notes, but my impression was that it was a bit too woody in comparison to the 18 Year that I absolutely adore. The 21 also has some sherry casks added to the mix, which didn't help when compared again the bourbon wood clarity of the 18. While a transcendent experience would have been lovely, there is something satisfying about enjoying a younger and more affordable whisky over than an older one.

After snagging a small single cask bottle of Auchentoshan at the visitor's center (haven't cracked it yet, so you'll have to wait for tasting notes), I packed my things up again and prepared to ride back into Glasgow. I took a slightly different route back after finding the Firth & Clyde Canal path, which started with the tiniest set of locks I've ever seen. 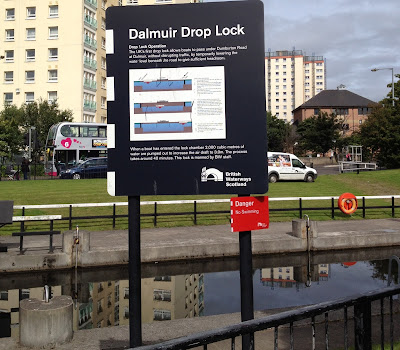 The water in the canal is almost level with the bridge, so instead of building a higher bridge they installed a set of locks to allow boats to pass underneath. While not quick, it's an ingenious solution that allowed the other infrastructure to stay in place. I continued along the path for a number of miles, until the pavement ran out and I was forced to head back onto the roads. I was saved by the Scot Guide app on my phone, as Google Maps had reset, leaving me without any other way to navigate (yes, I did have a paper map, but it was buried somewhere in my panniers). I can't recommend it enough if you're going to Scotland, as it stores maps offline and thus doesn't require cellular or WiFi service to work. After some circumlocution, I eventually made my way into the city center. Unfortunately it had taken me a lot more time than I had planned on, so I had to grab some yogurt for a quick lunch - setting a bad precedent for the rest of the trip - before navigating my way to Glasgow Central Station. There I purchased tickets to Ardrossan Harbour so I could catch a ferry to the Isle of Arran. The train ride was fairly uneventful, though I enjoyed watching the countryside slide by.

The train pulled into the last stop just in time for me to purchase tickets for the ferry and walk on board. I tied up my bike and slipped upstairs to the top deck.

The weather was windy but dry and relatively warm, which I appreciated since I knew I had more miles to ride before the end of the day. We disembarked at Brodick, where I stocked up on a few essentials that I had forgotten and tucked into a late lunch/early dinner to refuel before I got back on my bike. The chili I had was... palatable... but then, I'm not sure how much I expected of TexMex cooking half a world away. The important part was that it was filling, so I set off with a reasonably full belly.

The opening miles of the road from Brodick to Lochranza were relatively flat and in decent shape compared to what I was expecting - everything I had read and heard suggested that island roads in Scotland tended to be a mess. The views were almost universally excellent.


The road continued to be pleasant until I reached North Glen Sannox. It was an astoundingly beautiful valley, but the road became a long and unrelenting uphill slog. Much of this was due to it being my first real day out, the fact that I had already ridden a respectable number of miles that morning, and not eating lunch at the proper time. Unfortunately this also meant that I didn't get as many pictures as I would have liked, but others have done as well or better than I could have. 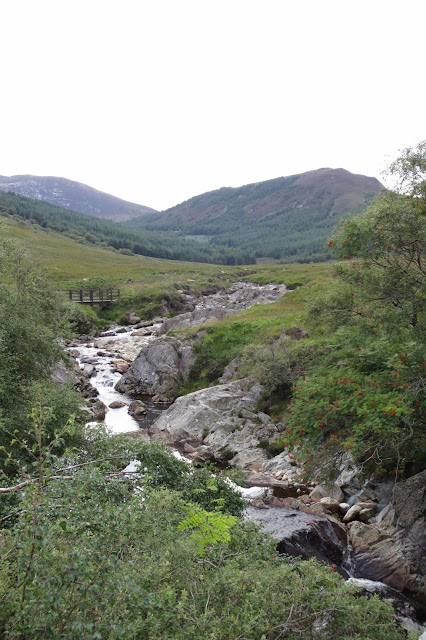 The downhill descent on the other side was a little bit harrowing, as it had gotten a bit damp and it was both long and steep. Thankfully my brakes held out and it was only a little bit further to reach Lochranza. My first look across the bay was gorgeous, with the old castle standing watch over the sea. 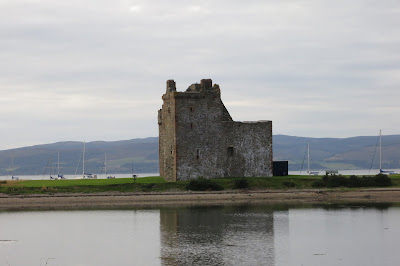 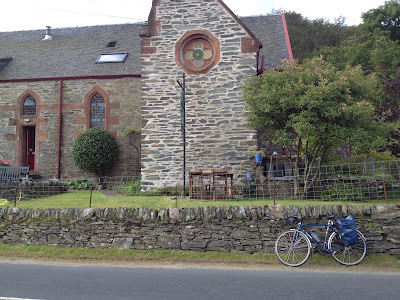 I finally reached my destination, the Castlekirk B&B, where I found that a) I was the only person scheduled to stay there and b) the proprietor was taking off for a vacation, leaving me in her friend's hands. After being shown to my small but comfortable room, I more or less flopped over and went to sleep after such a long day.
Posted by Jordan at 7:53 AM