Ledaig (good luck figuring out how to pronounce it) is the peated whisky marque for Tobermory distillery. I've reviewed their unpeated Tobermory 10 expression before and found it to be quite tasty after airing out, so I was curious to find out how the peatier version stacked up.

I will admit that I opened the bottle with a bit of trepidation after reading some rather unfavorable reviews. Especially before it was reformulated into a higher strength, non chill filtered version, its reputation wasn't stellar. However, Burn Stewart seemed to be pushing to up the quality of their single malts, so I dove right in. 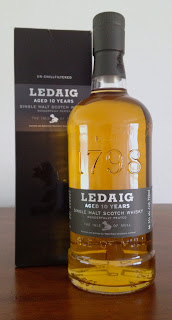 Taste: clean sweetness throughout, a hefty dose of pepper quickly comes on top, edges of fruit and berries around the sweetness mid-palate, vegetal and smokey peat begins gently then grows towards the back, well-integrated oak and salt/maritime notes at the back. After dilution, it becomes less  sweet with much more pronounced bitter oak tannins and peat, the fruity edges attaches itself to the peat, there are some raisin, dark chocolate, and creamy bourbon barrel notes in the middle.

In contrast to Tobermory 10, this Ledaig was actually more expressive right off the bat than after sitting for a few weeks. Initially there was a huge wash of bourbon barrel influence - caramel, sweet vanilla, etc. That died down a bit after it aired, but that character was definitely still present later. This was, at least to me, the key to this whisky. The peat clearly still has a very youthful quality, so the strong barrel notes from first-fill casks was key to giving it richness and balance. This makes me feel like it stacks up well against other entry-level peated single malts from Islay, which it clearly has the most kinship with. The price is also quite respectable - if you look in the right places. I picked my bottle up from Astor Wine, which has a nice free shipping deal for first-time customers. Basically, if you can find this one for under $50, I wouldn't hesitate to recommend it. Above that the competition gets stiffer.

There are a couple of things I'd like to see from Ledaig now that I've tried the standard offering - first, and foremost, is a sherry cask matured version. I think Ledaig could shine even more brightly if it got the Bunnahabhain treatment - blend together a mix of first- and second-fill bourbon casks with some first-fill sherry casks. You'd get all of the rich caramel and vanilla alongside some extra fruit notes to work in counterpoint with the earthy peat. Sadly there aren't even a lot of options in the IB world right now, so I can only hope that Burn Stewart has some Ledaig sherry casks tucked away that will see the light of day in future. Secondly, I wish that the distillery would release some older expressions. I've heard excellent things about Ledaig after it has some more age on it and it would be great if the distillery started expanding their range. I have a bad feeling that older expressions would also be rather expensive, given the price point of Tobermory 15 Year, but one can hope.
Posted by Jordan at 8:26 AM