I once again woke bright and early - I didn't have a ton of miles to cover before my first appointment in Bowmore, but I didn't want to dawdle either. I ate breakfast and said goodbye to Joy before leaving the Askernish, then headed north.

The bulk of the Port Ellen maltings was hard to miss on my way out of town. It's unmistakably an industrial site now - the remnants of the old distillery are completely dwarfed by the maltings. 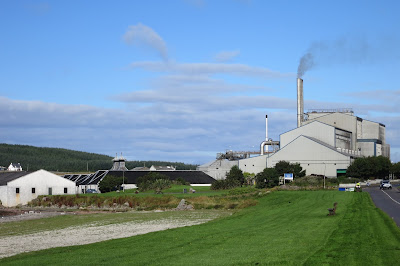 Though I had never tried a Port Ellen before, the almost constant talk about the place meant that viewing it still produced a certain cognitive dissonance. The place is apparently very special, yet there's little if anything romantic about it as it currently exists.

In the interest of time, I took the more direct A-road route to Bowmore. It was a lovely ride, since the sun was out and the wind wasn't blowing too hard. I had heard from locals that it was a bit of a wavy road, since it was built across an enormous peat bog, so the road has a tendency to sink in places. This was less noticeable on a bike than on a car, but it could still be seen from certain points. While I didn't get to see any peat cutting in progress, I did see areas that had been cut before. 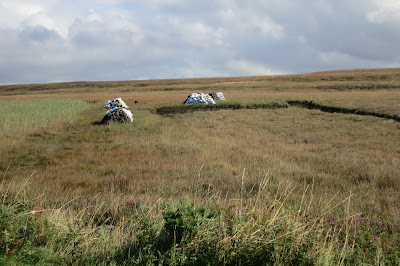 It didn't take too long to roll into Bowmore, where I found myself with some time to kill. Though the wind made it a bit chilly, it was still very nice to just sit outside and soak up the sun. 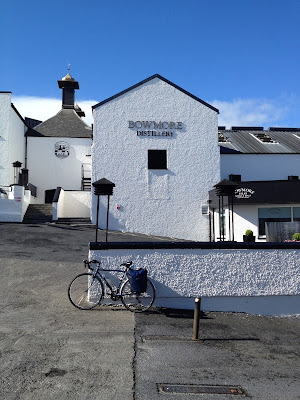 The tasting sessions at Bowmore are at 12:15, which is a little inconvenient since I wasn't quite hungry enough to have lunch beforehand. So I dived into an hour of whisky tasting (notes later).

After the tasting wrapped up, I went on a tour of the distillery. Katrina first led us into the malt barns, where Bowmore produces about 40% of the malt it uses. Bowmore contracts with a dedicated set of 16 farms for their malt, with the other 60% being malted by a commercial malting plant. The maltsters own the farms, which ensures traceability - if something is wrong with a batch of malt, it can be more easily traced to either something wrong with the maltings or a particular farm. This gives them more control over their malting process than distillers that simply buy malt on spec. 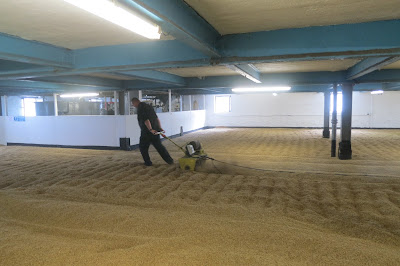 The malt was being turned while we were there, which looked like an arduous process, even with an electric malt aerator, which needs to be done every four hours, over three floors, for four to seven days.

From there we walked up to the kiln, where a batch of malt was being dried with hot air. The peating had already been done for this batch, which takes about fifteen hours, then hot air is used to finish it off over forty-five hours, giving malt that has about 25 PPM phenol content. Bowmore used to use about eight tons of peat a week for their maltings, but now consumes two to three tons. Bowmore's kiln has a device, which can be seen at the back, which periodically turns the drying malt so that it is evenly heated. I'm sure the employees appreciate not having to do it by hand, especially when the malt is being peated.

From there we passed by the mash tun, which is a single large copper-topped affair. The large wooden cylinder above is the grist bin, where ground malt is stored before being fed into the mash tun. 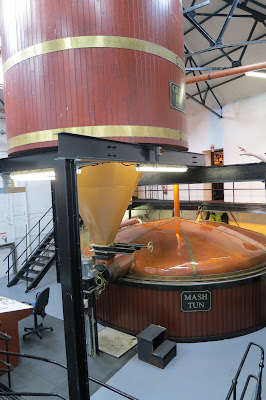 Next was the room with Bowmore's washbacks. These are all traditional Oregon pine. A first while I was on Islay, the room actually smelled very, very good - honey, wood, yeast, spicy, caramel, and maple syrup. It was quite striking and rather surprising. 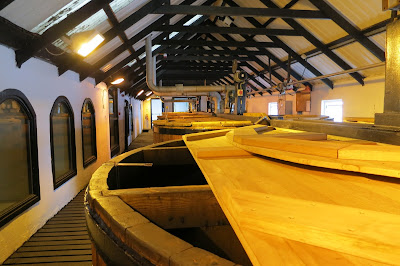 The fermentation is fairly short, at about 50 hours, with the wash coming out at 7.5-8% ABV. This is then pumped into the still room next door. Each 40k liter washback is split evenly between the two 31k liter wash stills, giving a fairly low charge. 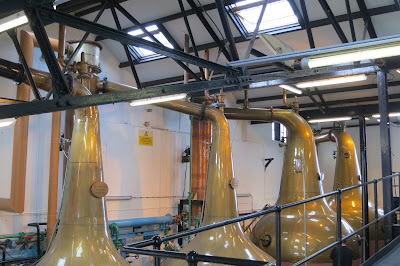 Bowmore's wash stills are fairly standard, with flat lyne arms. This gives them a fairly neutral profile, though the lower charge will increase copper contact. The spirit stills are relatively narrow and tall, with slightly (5º and 10º, respectively) rising lyne arms. This will generate more reflux and give more copper contact, producing a lighter spirit. However, the 14.7k liter stills are charged almost to capacity, which will reduce copper contact. Combined with Bowmore's lower peating levels, the new make spirit is lighter and more delicate than that produced at the Kildalton distilleries. 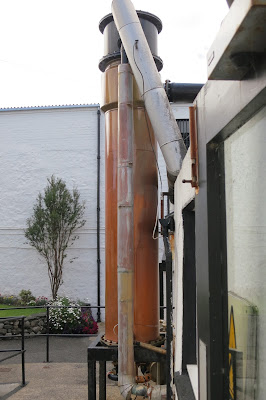 Through a quirk of architecture, one of Bowmore's stills is actually situated outside, which means that the flow of water has to be adjusted more frequently to account for the weather (temperature, wind, rain) affecting the amount of cooling.

Bowmore's spirit is filled mostly into first- and second-fill ex-bourbon casks, with a smaller number going into ex-sherry, ex-port, and other ex-wine casks. All of the distillery's output goes into single malts - none is sold for blending.

We got to peek at the warehouse, but not actually go inside. There was also a fill your own cask, which sounded tasty, but the price was just too steep for me. 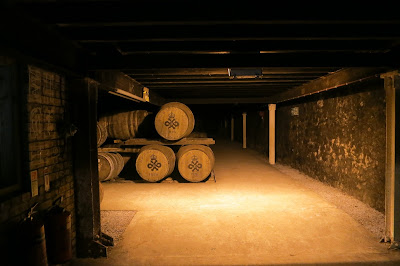 I left Bowmore with some of the same feelings with which I left Laphroaig. Bowmore is caught between the old ways of doing things, as exemplified by their floor maltings, and the new ways, which will be necessary if they want to continue expanding production. They currently operate five days a week and are considering moving to seven. However, they already use all of the output from their floor maltings, so any more will have to come from the commercial supplier, diluting whatever special character the floor maltings give them. 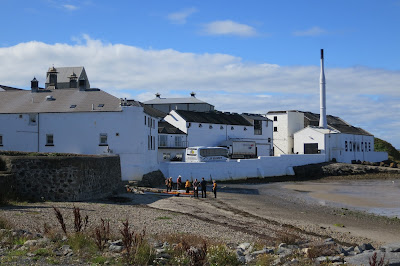 After the tour had wrapped up, I discovered that I had made a bit of a mistake: between the tasting and the tour, I had passed lunch time and the restaurants in town had mostly closed down for the lull between lunch and dinner. I wasn't in a dire state, but I also knew that I needed to get the rest of the way around Loch Indaal before nightfall. While it was a fairly short hop to Bruichladdich, where I would be staying the night, I needed to overshoot the mark a bit to go to Port Charlotte, where I was hoping to find facilities to do some laundry. So, as I would do all too often, I ate a granola bar, gritted my teeth, and kept moving.

The ride around Loch Indaal was simply beautiful. The terrain was mostly flat, there wasn't a ton of traffic, and the water was very pretty. I made pretty good time, despite the lack of food. Luckily the Anchorage B&B, where I was going to stay the night, was right on the main road. The owners were out when I stopped by earlier in the afternoon, so I pressed on to Port Charlotte. It was only a couple more miles down the road from Bruichladdich. I got a bit confused looking for the Port Mor Centre, but eventually found my way there. It is a combination community center and camp ground, which also happens to have publicly accessible laundry facilities. I eventually worked out what I needed to do and plonked down to get some clean clothes. If I had been smart, I would have eaten while I was there, but I was so focused on getting the laundry done that I didn't think about it.

After everything was clean and dry, I packed up again and poked down the road looking for somewhere to eat. It was getting late-ish, so I was lucky enough to find a reasonably priced restaurant that was still open. I tucked in a very filling bowl of mac & cheese, which went a long way towards making me feel restored. After settling my bill, I made my way back to Bruichladdich in the fading light and finally checked in to the B&B. After a shower I tucked into bed early, knowing that I had a full day ahead of me. Little did I know that my plans weren't going to work out quite the way I hoped they would.
Posted by Jordan at 8:29 AM