I really enjoyed the G&M 1988/2002 Bladnoch I tried earlier this year. So I jumped on this bottle from McGibbon's Provenance line when I saw it for sale at Ultimate Wine Shop (it helped that they also had a bunch of madeira that I really wanted).

This whisky would have been distilled only a few years before Bladnoch was closed by DLC, the forerunner to today's behemoth Diageo, as 'surplus to requirements'. Though the distillery has since been revived by the Armstrong brothers, this was an opportunity to try a piece of whisky history. 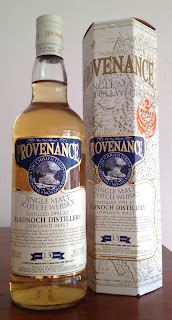 Taste: vague fruitiness, malty sweetness and bourbon grain notes up front, prickles of pepper and oak, thicker malt sweetness, a little vanilla, baking spices, something yeasty in the middle, chocolate at the back.

Early in the bottle I had a bad feeling that this whisky was betrayed by substandard casks - it had notes of cardboard that I associate with tired oak that don't have much left to give. This mucked up what would otherwise have been a pleasant, if unremarkable whisky.

However, after about six months of being open, the air had really helped it. The cardboard had disappeared, replaced by light but inoffensive oak, and the chocolate and fruit notes got a lot stronger, making it seem almost sherried. Much like the Tobermory 10 Year I had earlier this year, it seemed like it just took some slogging to get to the good parts. Again, I'm a bit torn about recommending this whisky - it's really nice now, but you have to be willing to either work your way through the less pleasant end of the bottle or wait for it to properly aerate after opening. The price tag is also a bit on the high side for its age, but there aren't a lot of options when it comes to Bladnoch in the United States. Your call.
Posted by Jordan at 8:02 AM