The Scotch Malt Whisky Society, which was recently sold by Glenmorangie to a private equity firm, is famous (or infamous) for the fanciful names of their single cask releases. With deep connections to the whisky industry, they always have significant breadth and depth in their cask selection.

This particular single cask is a Caol Ila distilled on August 29th, 1995 that was aged for 16 years in a refill sherry butt, then bottled at cask strength of 59.8% with an outturn of 540 bottles for the Canadian branch of the Society. 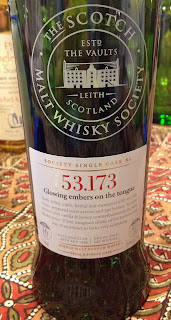 Taste: big cask strength alcohol sweetness up front, counterbalanced by Caol Ila peat, American oak influence (berries/fruit, caramel), root vegetables, and a bit of new make greenness around the middle, and increasing tannins towards the back, with just a hint of sherry influence under everything if you look for it. After dilution, the sherry wakes up and provides a fruity gloss over the opening sweetness, but the back half is somewhat blown out by the even more aggressive alcohol heat, though some nougat notes emerge beneath it and ash is pulled out near the back.

This is a classic Caol Ila. The peat was always in focus and it has the herbal/pine quality that I associate with the more refined character of Caol Ila in comparison to its other Islay brethren. With that said, it didn't quite measure up to my expectations. First, the sherry cask was very shy - when I first tried this I had forgotten that it was from an ex-sherry cask and thought it was an ex-bourbon cask. That suggests to me both that it was American rather than European oak and that the first fill of this cask pulled a lot out of the wood, not leaving much behind for this fill. Secondly, the alcohol was very, very hot for a whisky solidly in its teenage years. It's possible that there is a dilution point that would have suited it better, but with only a sample to work with I was unable to experiment.

Admittedly, all of this is irrelevant as this whisky was released several years ago and is likely sold out everywhere. So I will keep my eye out for other teenage Caol Ilas as I would like to try more, but this one doesn't hit the right price:quality ratio for me.
Posted by Jordan at 8:26 AM