Whisky Review: Wemyss Clynelish 14 Year 'A Day at the Coast'

Wemyss is an independent bottler that takes a similar tack to the Single Malt Whisky Society in giving their bottlings fanciful names, to deemphasize distillery character. Wemyss bottles both single casks as well as an ongoing line of blended malts.

This cask is from Clynelish, which was distilled in 1997, aged for 14 years in a hogshead (probably refill, possibly sherry), then bottled in August 2011 at 46% without coloring or chill filtration. 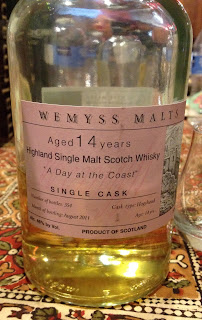 Wemyss Clynelish 14 Year 'A Day at the Coast'

Nose: fields of wildflowers, a thick layer of vanilla, clean Clynelish malt, very light oak underneath, underripe berries and pears, orange peel with a touch of clove, nutty/oily (walnuts?) distant salinity. After adding a few drops of water, the floral notes subside a bit in favor of the fresh malt character, making it seem even more youthful, and revealing a bit of sherry.

Taste: clean malt sweetness with vegetal undertones throughout, floral, citrus (lemon and orange peel), and sherry notes build from the middle back, seawater in the background, a burst of berry esters and unsweetened apples underneath, mild oak tannins with a touch of chocolate near the back. After dilution, the malt becomes sweeter and richer, giving the palate a more rounded character, the floral notes are deemphasized by don't completely disappear, the sherry and oak integrate, giving the back end some solidity, giving way to a lighter malty fade out.

This seems to have been a relatively inactive cask, letting the spirit shine without imposing much oak during its 14 years. This makes for a very pleasant, somewhat refreshing whisky, albeit one that could be read as younger than it is. The experience is also rather consistent, with the nose, palate, and finish all displaying roughly the same notes. So if you like those things, this could be your jam. If you're looking for something with more complexity, it might not fly.

The obvious comparison here was to the OB 14 Year, which I happened to have. Diageo's offering is significantly darker, though I'm not sure whether that's because they're adding caramel coloring (entirely possible) or because there are more active casks in the mix (also entirely possible). Similar floral character is present, but less assertive, in favor of more oak and vanilla. There's also a touch of smoke in the OB that when combined with the oak give it a dark and more brooding character in comparison to the brightness of the Wemyss. The coastal character is also much more present in the OB, which is a nice counterpoint to the oak.

In the end, my only complaint about this Wemyss single cask is the price. It was solidly over $100 when it was released, roughly double the price of the OB 14 Year. While it shows a different side of Clyenlish, I just can't see it being worth that much more than the OB.
Posted by Jordan at 8:19 AM