Glenglassaugh is a Highland distillery northeast of Speyside built right on the coast. I will leave most of the detailed history to the capable hands of Malt Madness, but the important part is that Glenglassaugh was mothballed between 1986 and 2008. That twenty-two year gap meant that even more so than other revived distilleries like Ardbeg or Bruichladdich, Glenglassaugh became more or less a new distillery because much of the equipment had to be replaced and the little remaining stock that the new owners were able to purchase was very old. This created an extremely bifurcated product line split between NAS releases that were a few years old at most and very expensive bottles in the 25-40 year old range.

This whisky was matured in a mix of ex-bourbon and ex-sherry casks, then bottled at 46% without coloring or chill filtration. 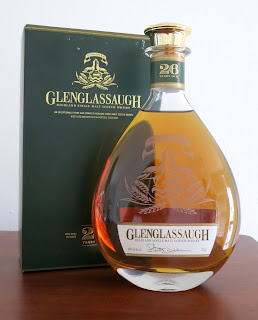 Nose: spicy oak interwoven with dank sherry, caramel, musty/dunnage warehouse, fresh hay, clean malt, a touch of vanilla and something savory, orange peel, pink bubblegum. After adding a few drops of water it becomes sweeter and more malt driven, with the oak becoming softer and integrating with the sherry, and the savory note becoming stronger.

Taste: bittersweet sherry throughout, oak tannins start near the front and rise and fall across the palate, orange and vanilla around the middle, a burst of sweet malt and more vanilla near the back. After dilution it becomes sweeter through out, balancing the oak, with sweeter sherry in the middle, and a slightly drying fade into the finish with more savory character.

That was what I wanted it to be - an experience. Pre-closure Glenglassaugh is becoming extremely rare and when it does surface commands an extremely high price, so this is likely to be my only chance to try it. In a sense the quality is almost irrelevant, since it's primarily about being a piece of whisky history.

But since I paid my own money for this bottle ($169), value still matters to me. My first impression was that when these casks were married and bottled, they were approaching the point of no return. Despite only being a quarter century old, well into middle age but far from elderly for malt whisky, the oak is starting to get the better of the spirit. Given the target audience for this release - folks who will be impressed by the fancy decanter and expect an oak-heavy spirit from expensive whiskies - I think that it largely hit the mark. I would have preferred something with more refill casks in the mix to give it a lighter touch, but I'm not sure how many the blender had to choose from at that point. Time in the glass and water help to loosen some of the oaky grip, but it remains in roughly the same mold. So while I did enjoy the whisky, it would not be my first choice absent the history, especially at the price.

The best thing I can say about this whisky is that it reminds me a lot of Ben Nevis. The savory character gives more complexity than it would have if it was a more straight-forward/cleaner spirit. So if you're sad that you've never gotten to try an old Glenglassaugh, hunt down an older sherried Ben Nevis and you might be close to the mark. With that said older Ben Nevis is also becoming somewhat dear, but at least it's not as bad as old Glenglassaugh.
Posted by Jordan at 8:23 AM