Springbank's 100º Proof expression has gone through a number of iterations over the years that were all slightly different from each other, leading to a certain amount of confusion. To begin with, 100º proof means different things in the UK (50% weight/volume, usually rounded down to 57% ABV) and the US (50% ABV), so there have always been dueling versions across the Atlantic. Second, the composition of the expression changed from something closer to the standard 10 Year with a mix of bourbon and sherry to an all-bourbon setup right before they introduced their all-sherry (until recently) 12 Year Cask Strength. So, what we have here is one of the last iterations of the theme, an American version at 50% made from all ex-bourbon casks, as always without coloring or chill filtration. 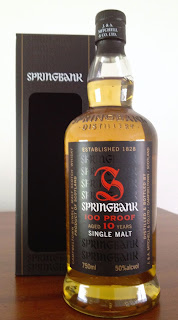 Nose: big and dirty - oil cloth, leather, engine oil, dry mossy/herbal peat, fresh hay, dried malt, mild background American oak. After adding a few drops of water the dirty notes are toned down, but are joined by a bit of nutty caramel. After even more water it gets more dry and herbal, with cinnamon, fresh malt, and a little floral seashore.

Taste: sweet throughout with a fair amount of heat, vague but syrupy fruit with a citric tang in the middle, a bittersweet twist near the back with light oak and peat, plus even more alcohol heat and something raisin-y going into the finish. After dilution it becomes drier and less overtly sweet, more oak and peat come out at the back and the alcohol is significantly calmed down. After adding even more water it becomes sort of generically malty/oak sweet with just a bump of Springbank character at the back.

For all that this is at a significantly lower proof than the UK version, it took the bottle sitting open for the better part of a year for it to settle down enough to be drinkable. Even now it has far more burn than many cask strength whiskies that I've enjoy. Some of that is probably its youth and the fact that the ex-bourbon casks used to mature the whisky appear to have been filled several times before, because the final results are still pretty raw. Thankfully not as raw as I found Longrow 10 Year 100 Proof, but not so distant either.

In all honesty I've gotten through most of this bottle by making little blends with something sherried to round it out a bit. Proofing it down to somewhere around 45% helps the nose, but also takes out all of the oomph in the palate. While in theory I like bourbon cask Springbank a lot, I think this could have used some more first fill casks to give it a bit of caramel and vanilla roundness, à la Tobermory/Ledaig 10 Year. So while I don't mind having another bottle, I don't think it's going to get opened anytime soon.
Posted by Jordan at 8:05 AM