Unlike the last two samples of Glengoyne I tried, this is from the previous lineup. After Ian Macleod purchased the distillery from Edrington in 2003, they maintained a relatively nondescript set of expressions, with the 17 Year being the most popular among whisky geeks.

The spirit was aged in a mix of 65% ex-bourbon casks and 35% ex-sherry casks, then bottled at 43% with chill filtration and probably a bit of coloring. 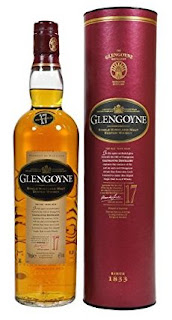 I tried this whisky at the Highland Stillhouse.

Taste: light and a little thin at first, sweet malt, light sherry, floral, mild oak, a hint of something vegetal, very creamy, berries, savory vanilla, and a little pepper. After dilution a pleasant sour apple tinge is added throughout, there is more malt focus, the oak integrates nicely, and it becomes a little grassy.

I went into this whisky with fairly high expectations. It has been fairly common to bemoan its disappearance from liquor store shelves, as it was an older sherry driven whisky at a very affordable price. As things stood, admittedly from a bottle that had been open for an indeterminate amount of time, I found it a little disappointing. While it was relatively mature and sherry driven as expected, it didn't have enough weight and body to make it something I was sad to see go.
Posted by Jordan at 8:43 AM