Next up in a series reviewing single barrel bourbons are a couple that don't provide quite as much information as one expects from a single barrel bottling. Usually the point is that you get a healthy dose of info about things like the barrel number, how old the barrel is, when the whiskey was distilled, when it was bottled and so forth. These two, while labeled as single barrel bourbons, provide significantly less information, making it harder to compare bottle to bottle. However, it may be that I'm just missing something, so if there's a secret code on the bottles, please let me know.

Taste: sugary sweet up front, mild rye spiciness, peppery chocolate and tannic oak mid-palate, which builds towards the back of the throat, then fades into the finish, which becomes creamier and gains some citrus and more oak in the mid-palate after the addition of water

Finish: long but light, a rye glow with a hint of orange, rum and oak

Eagle Rare Single Barrel Bourbon is basically a step up from Buffalo Trace's basic bourbon. It's made with the same low 8% rye mash bill and bottled at the same 90 proof, but has been aged for a significantly longer time and theoretically offers some barrel-to-barrel variation. However as I noted at the beginning, the bottles don't indicate which barrel they came from, so it's hard to tell whether a given bottle is from the same or a different barrel. Interestingly, this bourbon reminds me a fair bit of El Dorado 15 Year, in as much as Eagle Rare is kind of rummy and they're both relatively sweet and have a strong oak component to their flavor. However that also means that there are times when I feel like ER has strayed a bit too far in the oak direction. But if you like whiskies with a bit more astringency, this is a solid buy at $30 or so. 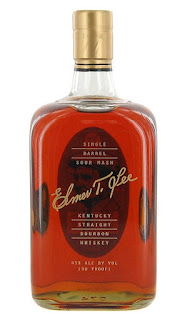 Breaking with my usual tradition, I'm going to do this in two parts, because it seems like this bourbon shows two distinctly different faces at different times

This Elmer T. Lee is dessert bourbon. I'm not even kidding. It smells like candy. It reminds me of a wheated bourbon like Weller, but with less perceptible oak influence.


Nose: warm caramel, some corn sweetness and a bit of rye, fruit and oak, with more oak and vanilla coming out after dilution

Taste: briefly sweet up front, segues into slight sourness, then a burst of chocolate and rye spice, fading into a slight but not unpleasant bitterness, which with a bit of water gains more sweet honey up front, chocolate in the mid-palate and oak near the back after adding a few drops of water

Finish: medium, honey and bitter chocolate with pepper, which becomes a bit more rye-focused with some dark fruits after adding water

As best I can find, Elmer T. Lee is made with the Buffalo Trace #2 mash bill, which has about 15% rye. This puts it roughly in the middle of the pack for bourbons. Which makes the fact that it tastes almost like a wheated bourbon at times rather peculiar. While I initially chalked this up to a previous mistaken belief that this was a low rye bourbon, additional tastings suggest that it really does just taste different at different times. There's no age statement, though reports I've seen suggest that it could be anywhere from 10 to 14 years old. The copy on the bottle claims that the barrels are dumped and bottled whenever they are determined to be at their peak. And as with the Eagle Rare, there are also no indications of what particular barrel each bottle comes from. So while there should be barrel to barrel variation, it'll be hard to figure out what you're getting with this bourbon. But in large part that's just the spirits geek in me talking. Ultimately this is still a fantastic bourbon and a pretty decent value given that it's usually priced in the low-30s. Especially in its sweet modes, I find this to be an eminently drinkable whiskey.
Posted by Jordan at 7:32 AM