I've mentioned this Irish whiskey before, but didn't have sufficient experience with whisk(e)y to really appreciate what it has to offer. Black Bush is the first step up from Bushmills' basic white label whiskey. The distillery states that it's composed primarily of malt whiskey that has been aged in oloroso sherry casks and supplemented with grain whiskey aged in ex-bourbon barrels. There's no information about the exact split, but my feeling is that it's probably 60-80% malt whiskey with the balance made up with grain whiskey. While there's no age statement on the bottle, it's my guess and that of other bloggers that this is probably 8-10 years old.


Nose: malty, with bourbon-y grain character, vanilla and a hint of sherry fruitiness

Given where it's positioned, this is a pretty good whiskey. It usually runs ~$30, which is quite reasonable given its age and malt whiskey content. I'd actually suggest this as a good choice for a bourbon drinker who wants to get a sense for what malt whisk(e)y has to offer, as it combines some of the best features of both malt and grain whiskies. It's not going to blow away a seasoned single malt drinker, but I don't think that's what Bushmills was striving for. My only quibble is that I wish they bottled it at a slightly higher proof. With the triple distillation that they tout all over the place and the reasonable amount of time that the whiskey has spent in barrels, all of the rough edges should already be smoothed off. With a bump in ABV this would be a standout. But with that said, it's designed to be a step up from their basic whiskey, so Bushmills probably doesn't want to make it too challenging. For that I might have to try their 1608 anniversary edition whiskey, which is bottled at a much healthier 46%. 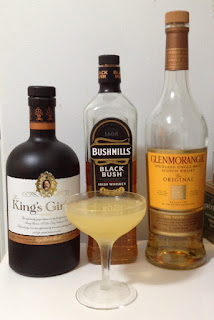 The smell is very malty, with a hint of ginger and the sherry cask influence of the Black Bush. The sip leads off a bit of sourness from the lemon juice and honeyed sweetness, which quickly transitions to lots of maltiness from the whiskies. This fades into sherried fruitiness, then the slightly sharp vegetal tang of the ginger liqueur. It all finishes with just a hint of chocolate from the combination of the whiskies and the liqueur.

This drink was based off of the Lake George from The PDT Cocktail Book, with the original's Drambuie swapped out for The King's Ginger Liqueur. It isn't the most complex cocktail ever, but it uses the ingredients to good effect. The Irish and Scotch whiskies play nice together and sync up well with the ginger liqueur, which also contains a measure of whisky. A nice drink to sip on St. Patrick's Day. I hope everyone is having a good evening and stays safe.
Posted by Jordan at 9:01 PM