The Mamie Taylor is one of the early steps towards what would become one of the most popular cocktail forms during the mid-20th century - the highball. Named after a famous Broadway actress who starred in productions around the late 19th and early 20th centuries, the drink had a brief burst of popularity and then just as quickly sank into obscurity. More recently it was resurrected by the inestimable Ted Haigh, also known as Dr. Cocktail, in his essential book Vintage Spirits & Forgotten Cocktails. 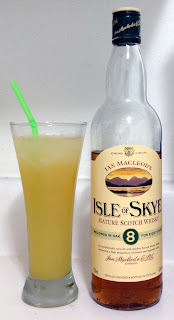 Build in a chilled pilsner glass full of crushed ice. Top with soda water and stir briefly to combine the ingredients. Add an extra 0.5 oz of scotch if you want the whisky to stand out a bit more.

The smell of the whisky's smoke drifts up gently from the drink. The sip leads off with a bit of lime and the carbonic acid of the soda water, followed by a burst of sweeter ginger flavors, then the scotch finally shows up with its smoke, melding nicely with the spicier elements of the ginger, which ends the drink on a surprisingly dry note given the amount of syrup that goes into it.

This is another drink where I felt like Isle of Skye 8 blended whisky fits really well. It has a nice balance between sweetness and smoke, plus a price point that makes me quite willing to toss it into cocktails. As I noted, this whisky dovetails rather nicely with the spicy ginger syrup.
Posted by Jordan at 8:23 PM