Much like the Balvenies I tried recently, I picked up a three pack of Glenfiddich miniatures over the holidays. I'll reiterate the point I made then that I feel like more distillers should be putting out these kinds of sample packs because it provides a very economical way for people to try their whiskies, especially the older end of their standard ranges. This gets people to try whiskies that they might otherwise stay away from due to cost and will probably encourage them to buy full bottles that they wouldn't otherwise be willing to take the risk of buying. Glenfiddich pulls out all of the stops with the packaging of these minis, producing custom bottles and giving each one a miniature version of the cardboard tube that the full size bottles come in. There's a reason this was put on shelves around Christmas and it is definitely a classy setup if you want to give this set as a gift. But with that said, here are my thoughts about each whisky. 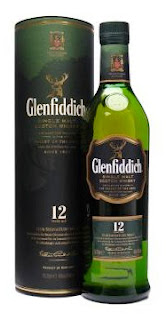 
Nose: pleasantly malty, honey, citrus, apple skins, a touch of raspberries and sherry, which becomes a bit sweeter with a bit of brown sugar and maple syrup after a couple of drops of water

Taste: not very sweet up front, sour malt mid-palate, becoming cleaner malt with a bit of pepper and sherry going into the finish

It's unsurprising that this is one of the best selling single malts in the world. It presents bits and pieces of very classic Speyside single malts, with emphasis on the malt and light sherry influence. Being bottled at 40%, it goes down easy and doesn't present the drinker with anything challenging. With that said, if you prefer more robust whiskies, the 12 Year will be somewhat disappointing. Except for the malt flavors, everything is extremely light and it often felt like I had to hunt for it. At the same time, it is rather pleasant and wouldn't be out of place in a situation where you want something to drink that won't be a distraction. 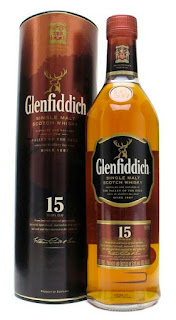 
Nose: more sherry-driven, with raisins and a bit of chocolate, a strong red wine note at first, which fades with time, and a bit of malt, which becomes maltier and weaker after dilution

Taste: not very sweet up front, malt and light sherry mid-palate, with sourness and dry cacao going into the finish, which becomes sweeter and more malty with less sherry presence after adding a few drops of water

Finish: bitter chocolate with a bit of peat and malt

I had fairly high hopes for the 15 year. I really enjoyed the similarly aged Glenfiddich Distillery Edition, which was real knock-out. The standard 15 year bottling is touted as being enriched by solera-style aging, where barrels are dumped into a large vat, about half the contents are withdrawn for bottling, then more whisky is dumped to top off the vat. Theoretically this should provide a heady mix of whiskies that are aged for a minimum of 15 years and who knows what upper bound. It can even be a good deal, if you look in the right places. However, I have a feeling that the low bottling strength of 40% betrays all of the work that goes into making the whisky before it is bottled. While richer and more obviously sherry-influenced than the 12 year, it still feels a bit tepid. I would love to try the 15 year bottled around 100-proof, at which point I'm guessing it would probably shine. Instead I will content myself with my bottles of the Distillery Edition and dream of what the regular 15 year could be. 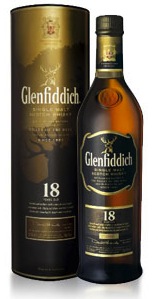 
Nose: a hefty dose of oak, orange marmalade, a bit of sherry lurking underneath, malt and chocolate oranges, which becomes lighter with more malt and less sherry and oak after dilution

Taste: not too sweet up front, a burst of sherry and cacao mid-palate, segueing into heavier oak tannins near the finish, which becomes malty sweet up front, with sherry, raisins and apples, then astringent oak after adding a few drops of water

Finish: malty sweetness, then the oak returns, bringing some peat with it

The 18 year is definitely the stand out of the bunch, which, you know, given the age and price, one would hope so. It clearly shows its age by the healthy oak smells and flavors throughout the experience. Additionally, it's generally more robust because of its 43% bottling strength. Even with all that said, I don't think I'll be buying a full bottle, even at $57. For one, I feel like the oak influence is a little too in your face, trying a bit too hard like a teenager insisting "No, really, I'm old enough!" I've got to wonder if this is an intentional move to assure buyers that they're really getting an older whisky. While there are some nice things going on, the bottling proof is still a bit on the low side (please, 46% at least!) and a bit less emphasis on the oak tannins could let the other elements shine. Give me that whisky at sixty bucks and it'd be in my liquor cabinet already.

So with all that said, I can't really fault Glenfiddich. They do what they do for a reason and it brings them in an awful lot of money. If you're new to scotch whisky, the 12 Year is a totally reasonable choice to ease yourself in. I might also suggest Glenmorangie 10 Year, which is about the same price but offers a lot of the same flavors in a slightly more robust form, or even Balvenie Doublewood. For an alternative to the 15 Year, give Arran 10 or the aforementioned Glenfiddich Distillery Edition a try. But while the Glenfiddichs aren't quite to my taste, this tri-pack is definitely worth a buy if you can find it. At ~$15, it's a nice and rather inexpensive way to do a vertical tasting for one or two people.
Posted by Jordan at 5:06 PM