This cocktail is an adaptation of the Fu Manchu from Beachbum Berry Remixed. While the original called for crème de menthe, I neither own any nor have any desire to purchase any. So I decided to sub in Green Chartreuse instead. In keeping with the theme, I named the drink after one of Flash Gordon's main enemies, who was modeled on Fu Manchu.

The story of the original drink is that Sax Rohmer, the author of the books featuring Fu Manchu, had a strong fondness for Meyers rum. Before lunch one day he decided that his main villain needed a drink and that it should be green. They finally settled on a drink with both lime and crème de menthe, that had the requisite hue. However, this took quite a bit of experimentation: "At the fourteenth attempt they did eventually get it right, but none of them wanted much lunch afterwards." However, that recipe was lost, so Jeff settled on a version from 1947. 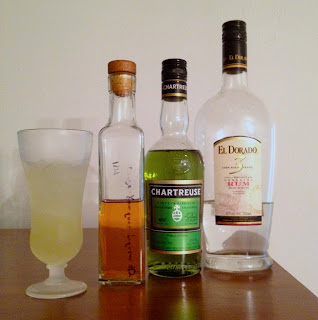 Combine all ingredients, shake with ice, and pour unstrained into a chilled glass.

The nose is dominated by the Chartreuse, with dry fennel and licorice rising from the glass. The sip opens with the rum's strong vanilla notes overlaid with with the herbal fennel from the Chartreuse. The drink is just barely sweet, with the lime juice counterbalancing the liqueurs. The orange liqueur tends to hide itself, but helps to round out the drink.

This drink will work best with El Dorado 3 Year white rum, as I find its flavors to be more savory than sweet, which works well with the Green Chartreuse. Overall it's a nice drink that bridges tiki and classic-style cocktails.
Posted by Jordan at 7:58 PM