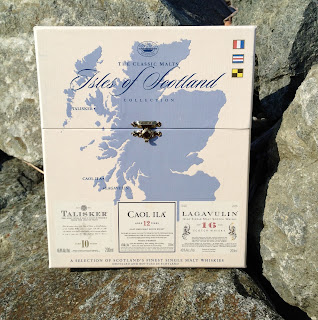 This is one of Diageo's 3x200 mL sets that collect whiskies from their Classic Malts under some sort of theme. This set pulls together their whiskies from the islands of Skye and Islay, which share some similarities in production methods and flavor. However there are some major differences, such as the six years between the youngest and the oldest whisky in this pack.

The packaging is absolutely top-notch and would make a fantastic gift for any whisky-loving friend as you get to try three different whiskies for roughly the price of one. And importantly for me, it's the only one of the Classic Malts sets that I've seen for sale in the United States, via City Wine Cellar in Staten Island, NY. If you've been looking to sample some fine peated whiskies, this is a very reasonable way to do so.

Taste: honied, then sugary malt up front, then a touch of sherry and fruit, brine, and a dash of black pepper, followed by mild vegetal/smokey peat and oak tannins. After dilution, the flavors become more integrated, with the sweetness extending back and the peat extending forward on the palate, a definite raspberry note develops mid-palate, plus more tannic oak

Talisker 10 is bottled at their traditional 45.8% ABV. The distillery peats its malt to a relatively high 20 PPM, which is about half of the level of the other two Islay whiskies. Though oddly, one time that I was sampling this whisky, the peat seemed to almost disappear after adding water, leaving something that reminded me strongly of Hazelburn.

I've gotten to try this one before and my more hurried impression jibes fairly well with what I got out of the whisky after more time. I've also tried its more sherried sibling, Talisker Distiller's Edition, and they're an interesting contrast. Now I can definitely see how the underlying malt is modified by the extra aging in amaroso sherry casks. The basic Talisker malt seems to get just a hint of fruitiness that reminds me of sherry, which suggests that there's at least a little bit of sherried malt in there already. However, I also feel like the DE gets slightly better cask selection, with more robust flavors than its more humble sibling. Given that the Distiller's Edition can go for as little as $15 more than the 10 Year, I'd say its worth putting up the extra cash, especially if you like the peat/sherry combo. 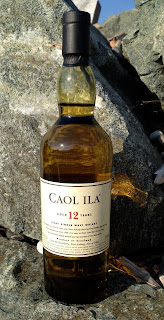 Taste: thin, creamy, sugary, malty sweetness up front, then pine/juniper, black pepper, and mild peat. After dilution, it becomes sweeter and more integrated, with the malt and peat extending further back and forward, respectively, overlapping with the black pepper.

Caol Ila is a new one for me and it's quite the treat to try this Islay whisky. The distillery is located in Port Askaig near the northeast corner of the island, just down the road from Bunnahabhain. Established in 1846, the distillery initially did not fare well, but has gone on to become one of the most productive distilleries on the island, providing the bulk of Diageo's peated whisky needs. The entry-level version is bottled at 43%, like most of the Dieageo's single malts. Unlike the other two whiskies in this set, Caol Ila 12 comes from whisky aged entirely in ex-bourbon casks, without any sherry influence. While there is a bit of fruitiness, the focus is definitely on the interaction between the malt and peat. I was particularly intrigued by the pine/juniper notes I found in the whisky, which gives it a gin/genever sort of quality. I was also pleased at how well it stood up to dilution, given the relatively low bottling strength. Overall, a very tasty single malt that makes me look forward to digging into the Caol Ila Collection I picked up recently, which includes the Cask Strength and 18 Year Old versions alongside the standard 12 Year Old.

Taste: sherry/wine/vinegar sweet/sour up front, then berries, black pepper and malt, followed by vegetal/ashy peat and mild oak. After dilution, the opening becomes more sweetly fruity, which lingers throughout the sip, the peat retreats slightly and becomes more vegetal than smoky, and the oak becomes more bitter.

Lagavulin is Diageo's second Islay distillery. The distillery was founded in 1816 in the town of Port Ellen, alongside two other well-known Islay distilleries, Ardbeg and Laphroaig. Its history with the latter is particularly convoluted, as there were numerous conflicts between Lagavulin and Laphroaig, with an attempt made in 1908 and continuing until 1962 within Lagavulin to copy Laphroaig's whisky with an operation called Malt Mill. The unrealized goal was to push Laphroaig out of business, but it was obviously unsuccessful and Malt Mill was folded back into Lagavulin when the distillery was rebuilt in the 1960s.

For much of Lagavulin's recent history, the 16 year old expression was the only one available. The passing of the 1990s brought out the Pedro Ximenez-finished Distiller's Edition, which was later joined by a cask-strength 12 year old, in addition to sporadic 20+ year old special releases. Through it all the 16 YO has formed the core of the brand and its not hard to see why. While both Lagavulin and Caol Ila get their peated malt (~35 PPM) from Port Ellen and the final whiskies are bottled at the same 43% ABV, their products are very different. Lagavulin has been smoothed by by its extra four years in oak, as well as the addition of sherry cask-aged whisky into the mix. While Caol Ila is comparatively fresh and malty, Lagavulin seems more august, with more barbecue-like peat and the rich fruitiness of sherry.

Overall, if you haven't tried any of the whiskies in this collection, I would highly recommend picking it up. It's a great way to get to compare a very fine set of peating whiskies without spending too much money. I don't think I can pick a favorite out of the bunch as they all have their charms, but the Talisker and Lagavulin might edge out the Caol Ila by a hair. I'll be very interested to try Caol Ila 18 and see if a few extra years in oak give it some extra body to help compete with the sherried richness of the other two. However, in terms of value, I think the Talisker wins among this bunch as it has exceedingly good balance and the lowest price point out of the three. The Lagavulin was very good, but I'm not sure if it's sufficiently better to make me want to pay for a full bottle.
Posted by Jordan at 7:15 AM