Mount Gay is the oldest extant rum distillery in the world - documentation goes back to 1703, though it is likely that distillation on the site started even earlier. The distillery uses both copper pot stills and modern column stills. All of their rums are aged in ex-bourbon barrels, without any extra finishes. The distillery puts out a range of expressions from Eclipse Silver all the way up to the very old 1703 expression, but in this series of reviews I'll be looking at the core of their range.

Nose: fruity - berries, banana, pineapple, thin molasses, a hint of vanilla and raw alcohol. After dilution, the sweetness shifts towards honey and the fruits retreat.

Mt. Gay Eclipse was created in 1910 to commemorate a solar eclipse that occurred that year. The rum is aged for a minimum of two years and a maximum of five years before being blended and bottled. It doesn't have nearly the same body or heft as Mt. Gay's older rums, but it makes up for that with freshness and an abundance of fruit flavors. This makes it, in my mind, a very good answer to the question "what is one rum I should buy for my home bar?". It works especially well in tropical drinks, where its inherent fruity flavors should compliment the other ingredients. Speaking of which... 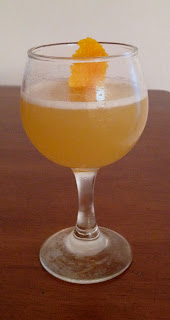 Combine all ingredients, shake with ice, strain into a chilled cocktail glass, then garnish with a large strip of orange peel.

The nose is dominated by the orange peel, but passion fruit, rum, and the vermouth's aromatics peek out as well. The sip begins with subdued sweetness and lots of fruit, segueing into falernum spices, which is the joined by the vermouth to give lightly bitter finish of ginger, rum, and vermouth.

This is my take on the Silky Johnson from Nights and Weekends in Greenpoint, Brooklyn. I did a lot of subbing, but I'm pretty pleased with the result. While I'm not sure how Dolin Dry compares to Cocchi Americano, I feel like it did a good job of tweaking the usual rum/fruit/sweet formula. I renamed it after one of the characters in the Portland hip-hop group Lifesaveas' Gutterfly album, to keep the feel of the original.

Stay tuned for upcoming reviews of Mt. Gay Sugar Cane Rum and Extra Old.
Posted by Jordan at 7:50 AM