After my review of the whiskey, I decided that I wanted to try to make a cocktail with it. There aren't too many cocktails that use peated whisky, as it tends to dominate as an ingredient, but there are a few. I used the Laphroaig Project as a template, but tweaked it a bit to account for the fact that McCarthy's Single malt isn't as strong or smokey as Laphroaig Quarter Cask. 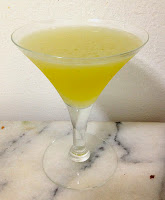 Combine all ingredient, shake with ice for six seconds, then strain into a chilled cocktail glass.

I'm pretty pleased with how this one turned out. Admittedly, as Camper English noted about the Laphroaig Project, "If you have all of these ingredients at home you are a huuuuge cocktail geek."

I resemble that comment.
Posted by Jordan at 9:31 AM