After posting about David Wondrich's Imbibe! a little while ago, my interest in the Improved Whiskey Cocktail was piqued. There has been an explosion of liqueurs on the market in recent years, which gives all sorts of options instead of the maraschino/absinthe combination of the original. Here's the first one I cooked up. 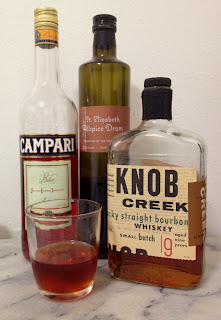 Combine all ingredients, stir with ice for fifteen seconds, then strain into a rocks glass. Squeeze a piece of orange peel over the drink and add it as garnish.

The nose has a lot of dry orange notes from the Campari and orange bitters and peel, along with some corn sweetness from the bourbon and hints of allspice. The sip begins smoothly, with orange and caramel, which slowly becomes bitter and spicy. First the Campari comes out, then the almost smoky notes of allspice, which then become bitter coffee.

I also tried this with Luxardo Bitter instead of Campari, but that version was actually too smooth. The Campari version needs to warm up a bit before it becomes fully integrated, but eventually everything finds its respective groove. I really like how the Campari and allspice play off of each other, augmented by the bitters. A very tasty drink and hopefully indicative of more good things to come.
Posted by Jordan at 9:03 AM