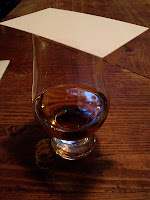 I went up to Seattle over the Thanksgiving weekend to spend some time with my family. Another one of the nice things about going up there is being able to visit St. Andrews Bar and Grill, which is a short walk from their house. While not quite at the level of the Highland Stillhouse, St. Andrews still has a very impressive selection of scotch whiskies that are served for very reasonable prices. While their online menu is a bit out of date and I didn't find the whiskies I had been planning on trying, I did notice some interesting drams while looking over their current selection. The first that caught my eye was Bruichladdich's Fino Sherry Cask.

This whisky is part of a series of sherry finishes that Bruichladdich put out a few years back, which included manzanilla, oloroso, and PX sherries. This whisky was distilled in 1992 and aged for 17 years, first in ex-bourbon casks, then finished in fino sherry casks from Bodegas Rey Fernando. Reviews of their fino sherry suggest that its flavors center around brine, almonds, and yeast. Lets see what it does when layered on top of Bruichladdich's malt. 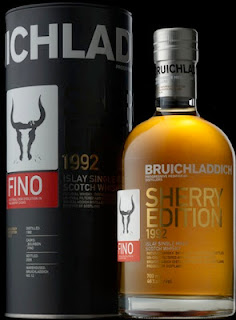 Nose: fino sherry is very evident - oily, olive, and brine, malt is underneath, nutty, caramel, nougat, oxidized sherry, slightly creamy. After adding a few drops of water, the sherry and caramel/nougat become more integrated, the richness is increased, and a burnt sugar or smoke note emerges.

Taste: caramel and nougat up front, fino sherry and brine throughout, underlying malt, a touch of pepper further back with bitter oak. After dilution, the whisky becomes much sweeter, with the caramel and nougat elements overtaking the sherry.

This was something of a peculiar whisky. I could still detect the Bruichladdich signature on the malt, but the fino cask very nearly overwhelmed the whisky and generally dragged it in a more savory direction. Adding water helped to integrate the whisky and let the bourbon cask notes shine, which made it much more easy drinking. But no matter what, the saltiness was still incredibly powerful. While it was an enjoyable dram, I felt like it would have been better with less time in the sherry cask - the influence is clear, which is great for comparisons, but less good for making a balanced whisky. While this is the result of Bruichladdich's peculiar circumstances when it was revived - the distillery had a lot of old stock, but nothing new, which led to a lot of cask finishes - I'd love to see a remake of this whisky as a vatting of pure ex-bourbon cask whisky and pure fino cask whisky. I think there would be better integration and balance. However, unless fino casks were laid down from the very early runs after the distillery was restarted, it'll be a while before anything like that could be put together and bottled. If we get even further into fantasy territory, I'd love to see some of Bruichladdich's peated whisky added into that hypothetical vatting. The brine of the fino sherry would mesh really well with a bit of peat.
Posted by Jordan at 9:37 AM