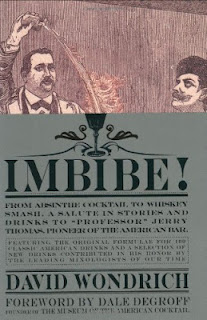 Last week I posted a review of David Wondrich's book on the history of punch. Imbibe! moves ahead a bit in history, covering the evolution of its successor, the cocktail, in America and the world. The focal point of the book is "Professor" Jerry Thomas, one of the first celebrity bartenders and writer of the first bartender's guide in history. Thomas traversed and tended bar in the furthest reaches of the growing American nation, but ultimately reached his greatest fame in New York City.

The book then moves into the history of cocktails. The second chapter is devoted to techniques for their preparation, ranging from the late Colonial period (using a hot poker plunged into a mug of something to make it hiss and steam) to just before Prohibition (when the classic martini glass came into vogue). There is also quite a lot of discussion about ingredients, many of which were lost or fell out of favor around the beginning of the 20th century. While a number were just starting to filter back into existence when the book was published in 2007, we have a much more expanded repertoire now, with high proof cognacs, Old Tom and Hollands (genever) gins, and real absinthe available in the States, if not always readily. The subsequent chapters are devoted to the evolution of drinks from their beginnings in punch and the many categories of drinks that used to be distinct but have since been subsumed under the heading of 'cocktail'. The book also includes some small chapters on recipes for 19th century bitters and investigates the origins of the martini. 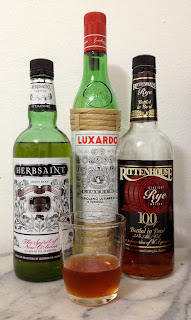 Along with Wondrich's book on punch, Imbibe! is a fantastic read for those wanting to learn more about the history of drinking. The research is thorough and the writing is engaging. The drinks aren't half bad either.

Combine all ingredients, stir with ice for fifteen seconds, then strain into a rocks glass and squeeze a piece of lemon peel over the drink to express the oils.

The nose is full of rye grain, though mellowed into sweetness, which is supplemented by a bit of the maraschino's funk. The sip begins smoothly and sweetly, but quickly transitions into strong rye, Ango bitters, and herbaceous notes from the pastis.

Though a little bit fiddly to construct (unless you have dashers for all of the liqueurs), this is a very tasty drink and a worthwhile improvement over the basic Old Fashioned or Whiskey Cocktail.
Posted by Jordan at 7:47 AM