Thanks again to my reader Florin for sending me a sample of this whisky.

I tried Longrow CV earlier this year. The robust peatiness took a little while to warm up to, but eventually I crowned it the winner among Springbank's CV range. With that under my belt, I was really interested to try one of the age-dated Longrows.

Longrow is the second style of Springbank's whiskies, with production beginning in 1973. It is a heavily peated (~55 PPM in the malted barley), doubled-distilled whisky. Those characteristics mean that it shares much in common with the whiskies made on the island of Islay, a bit northwest of the Kintyre peninsula where Springbank is located. This is entirely intentional, as the chairman of Springbank at the time wanted to see if it was possible to produce an Islay-style whisky outside of the island. It took several more decades until Longrow became a regular part of their production in the early 1990s, but it now has a fairly regular range of age-dated expressions. However, Longrow is still a niche even within Springbank, taking up ~10% of their production. Like Hazelburn, Springbank's other style, Longrow is named after a now-shuttered distillery in Campbeltown. 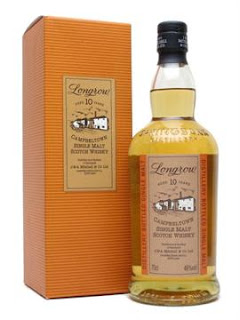 Taste: sour citrus and berries (makes me think of Oregon-grape), malty sweetness, toffee, chocolate, a touch of pepper, and mild peat at the back. After adding a few drops of water, the sourness become more recognizably lemony.

The first time I took a sniff of this whisky, all I could think was "Where did the peat go?". Longrow 10 is made from ex-bourbon and ex-sherry cask whiskies that are aged only a few years more than most of what goes into Longrow CV (there is some teenaged whisky in that expression, but probably not too much). Sure, there is also probably some 11-13 year old whisky in the 10 year old as well, but it's still not a huge difference in age. Yet the peat reek had been almost entirely washed away. In a lot of ways I think this actually makes it a more pleasant sipper - the peat is an accent on the malty flavors of toffee and chocolate. However, I did find myself wishing for something a bit more assertive. Admittedly, this may be a side-effect of tasting a sample rather than a fresh bottle, but other reviews suggest that Longrows quickly head in that direction as they get older - the 14 year old is supposed to be even more diminished (I'll find out for myself soon enough) and the 18 year old is downright tame. This is really, really surprising, both because of the heavy peat character in the CV expression and because the phenol concentration in the Longrow malt is about 50% higher than that of the malt used to make very peaty whiskies like Caol Ila and Lagavulin. There's something about the way Springbank ages their whiskies that causes the peat reek to diminish exponentially with time. It's not precisely a bad thing, but you have to properly calibrate your expectations. If you're looking for something Islay-style, this is going to be more of a Bowmore than a Laphroaig or Port Charlotte.
Posted by Jordan at 8:21 AM