Glenturret is a very small Highland distillery west of Perth. While there are claims that it is one of the oldest distilleries in Scotland, those claims are somewhat dubious. The current iteration of the distillery was put together in 1957 and ownership bounced around until it landed in the hands of a partnership between Edrington (owners of Macallan and Highland Park) and William Grant & Sons (owners of Glenfiddich, Balvenie, etc). In the early 2000s, they decided to turn it into a sort of whisky theme park with the construction of the Famous Grouse Experience, which is now one of the most popular whisky destinations in Scotland, with over 100,000 visitors every year.

The distillery itself has only two stills and puts out around 150,000 liters of spirit a year, making it one of the smallest in both physical size and output. Single malts from the distillery have not been particularly well regarded, but independent bottlers often get their own stock.

This particular expression is from Gordon & Macphail and was aged for 11 years in a first-fill sherry cask, then bottled at 46%.

This was another tasting from the Highland Stillhouse's vast array of whiskies. 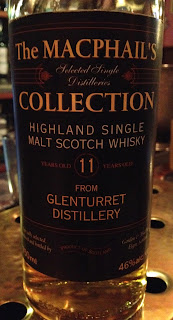 Nose: subdued by pleasant sherry influence, new make barley that reads like light peat, shellfish? After adding a few drops of water, there is more clear savory seafood, the sherry overtakes the grain, and something musky comes out.

Taste: very similar to the G&M Tamdhu 8 - moderate malt, sherry, and wood sweetness up front, some more muddled sherry in the middle, then grain and light oak at the back, with new make notes floating over everything. After dilution, it becomes more balanced, bittersweet, and integrated, more aggressively sherried, and the new make notes become shellfish.

If it weren't for the peculiar seafood/shellfish notes in this whisky, it would have been a pretty unremarkable young, sherried single malt. Even that interesting feature isn't enough to push it into territory where I would want a bottle, especially as the price is usually far too high in the US ($67-90) for its age.
Posted by Jordan at 8:08 AM