Until fairly recently Tamdhu was an almost forgotten distillery, anonymously churning out millions of liters of spirt every year for blenders. Its briefly closure by Edrington in 2009 saw it nearly disappear entirely, until the independent bottler Ian MacLeod (which also owns Glengoyne) purchased and restarted the distillery.

With the exception of two 25 Year releases during the early-2000s, very little official bottlings have been very old, leaving that field almost entirely to independent bottlers. Duncan Taylor has released a number of 30-40-odd year old single casks from the late-60s and early-70s that were all at or just barely above 40% ABV, suggesting that they had lost quite a bit to evaporation over the years. This particular cask was distilled during a brief era during which the distillery was still producing its own malt, but through Saladin boxes rather than floor maltings, and right before a major expansion of the distillery in the early-70s.

With all that said, my hopes were not too high after reading a fairly middling review from the folks at LAWS and a number of other reviews of sister casks that rated them as decent but uninspiring.

This whisky was distilled in November 1969, filled into what was almost certainly a refill ex-bourbon hogshead, then bottled in January 2004 with an outturn of 193 at 40.2% without coloring or chill filtration. 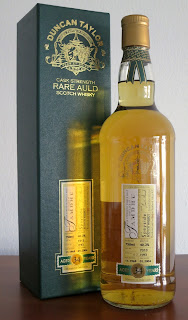 Nose: honied oak, cardboard, clean malt, a grassy edge, gentle floral perfume, heather/violet. After adding a few drops of water the malt moves forward and turns into oatmeal, while a lot of citrus peel comes out.

Taste: strong but somewhat hollow sweetness up front, old oak and grapefruit pith begin in the middle and grow towards the back, a vague muddle of vanilla, dried fruit, berry, mango, and floral notes in the middle, fading into more tannic oak and some sweeter lime peel. After dilution the sweetness becomes more expansive but also more hollow, the middle loses a lot of its character, but the oak has more punch and fizz at the back.

This is a whisky that was clearly bottled to keep it from going understrength, not because it was genuinely at its peak. This hits a lot of the classic notes of long aged Speysiders from Nth-refill casks. I suspect this would have been a lot better if it hadn't lost so much strength, as it feels like there is good character that has simply fallen limp. In a lot of ways it feels like one of the current old blends made up of slightly tired casks that sell more on the strength of their statistics than inherent character. On the upside, a little bit of sherried whisky tipped in can really pep it up, so it's not unsalvageable.

While not the most thrilling or cheapest whisky among my birthday stash, I'm still glad that I purchased this one. It's both a gentle whisky that has been pleasant to drink and a solid reminder that age doesn't necessarily make for a good or valuable whisky.
Posted by Jordan at 9:00 AM