Tomatin is something of a paradox. During its height in the 1970s it churned out a staggering 12 million liters of alcohol per year from a total of twenty-three stills (this probably has something to do with why single casks from that era are so heralded - there were a lot to choose from and some of them were bound to be good), but fell into relatively obscurity until recently and is producing at a fraction of its former scale 2.5 million liters out of a theoretical maximum of 5 million liters after many of its stills were removed during the 1980s (which is admittedly still a lot of spirit). 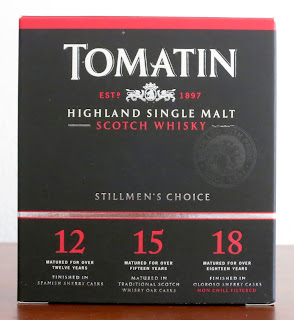 Nose: full of new make, dry malt, a touch of caramel and sour wine. After adding a few drops of water it remains nearly the same, but with slightly less new make and a little more wine influence.

Taste: sweet at the front trending towards bittersweet at the back, lots of new make, vanilla, and caramel in the middle, oak spice near the back. After dilution it becomes flatter and sweeter, but the oak is less spicy and new make notes are less pronounced.

It's unclear to me whether this was a bad miniature or the whisky is meant to taste like this, but it was not good. It feels like they took casks that weren't deemed suitable for any of their older expressions and tossed them in some not particularly active sherry butts for a brief period. This is full of new make notes with barely any sherry to be found. While it improves ever so slightly with water, that still places it a long way from being anything I would want to drink again.

Taste: very sweet up front, slides through light new make, dry floral malt and vanilla in the middle, into bittersweet oak tannins with berry overtones at the back, citrus in the background throughout. After dilution the new make is toned down, there are more berries and grape throughout, and something savory comes out at the back.

This is better than the 12 Year, but not by enough to make me want a full bottle. The refill casks are clear, both in terms of the color and the lack of oak impact. Again, some of this may just be the usual problems with minis degrading more quickly than full bottles, it still isn't fulfilling its function of making me want to buy more.

Taste: moderate malt sweetness up front, savory sherry throughout with a touch of raisin, dry malt in the middle, light spicy oak at the back. After dilution the sweetness spreads out and covers up the savory elements, the oak is briefly stronger at the back, and it becomes earthy around the middle.

This is more like it. While I would have preferred some moderately active bourbon casks to give it a more varied fruity profile, the sherry finish has pushed it closer to Glendronach. This is quite a decent whisky and can be found for under $70 in a lot of markets, which makes it a really solid deal. This is the only one I would think about buying, though it's a little down the list unless I need to pad out an order.
Posted by Jordan at 8:59 AM