Since its revival by Ian Macleod, Tamdhu has focused largely on its sherry cask matured whisky, both in the watered down 10 Year and the full proof Cask Strength. I have generally felt like the prices on these whiskies were too dear for their contents, but a significant number of Tamdhu sherry butts have made their way into the hands of independent bottlers, offering us another way to experience it.

This whisky was distilled on January 27th 2005, filled into a fresh sherry butt, then bottled in an outturn of 615 on September 22nd 2013 at 60.6% without coloring or chill filtration.

I proofed this whisky down to a number of different strengths to see how it would change. 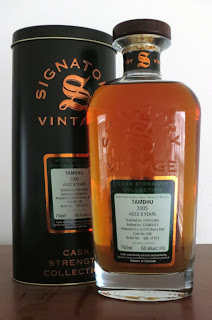 Taste: mild sherry and grain sweetness up front, sherry fades towards the back as a rising tide of corn plus oak, cacao, and grain bitterness overwhelms everything else

The youth of this whisky really shows up when it's reduced to 45%. The complexity is almost completely lost, especially on the palate. Young grain and sherry are all that's left, while the yeasty notes remind me more of a bourbon, which mesh with the youthful grain character.

Taste: concentrated sherry with diminishing sweetness all the way through, a hint of sulfur up front, underlying malt, slightly peppery around the middle, very little oak, sherry turns bittersweet at the back

This is, if anything, even more simple than at 45%, with the sherry overwhelming almost everything else. The intensity is noticeably amped up, though the alcohol is not particularly hot at this point. It does become a little bit more in balance with time, but the malt is never particularly assertive.

Taste: sherry throughout beginning sweetly then fading towards bittersweet, citrus and fruit esters in the middle, vanilla and malt near the back

While very similar in structure to the whisky at 50%, the sherry takes on a more complex character so the overall experience is less flat. The nose especially opens up with the unexpected yogurt and coastal character becoming more obvious. The finish also becomes much longer, though without much complexity. While the alcohol burn starts to become noticeable, it is much less than would be expected at 55%.

Taste: heavy sherry up front, sweet initially but quickly balanced by oak tannins, threads of citrus peel weave through it all, a bump of vanilla in the middle, lightly herbal at the back. After dilution the heat settles down a lot, the sherry becomes more savory and integrates with the oak, while the citrus mostly disappears.

While a lot of ink has been spilled bemoaning the growing presence of younger, immature malts coming onto the market, there are cases where the marketing hype about bottling whisky when it's done rather than when it hits an arbitrary number is exactly right. However, I'm more inclined to buy that line when it's a full strength single cask in front of me than a watered down, large batch expression.

I'm normally rather sensitive to new make character in malt whisky, so the almost complete lack of it here is really striking. It's possible that this cask would have gotten even better with time, but it's also possible that the sherry would have become too strong and wiped out any residual spirit character. I'm pretty OK with it being bottled when it was.
Posted by Jordan at 8:00 AM