Between the loss of the distillery's 18 year old expression and the dearth of casks beyond their mid-teens from independent bottlers, older Laphroaig is becoming a rare commodity and costs the earth when you can find it. So I was quite lucky to be able to try this one.

This was distilled at Laphroaig on May 4th 1993, filled into a refill ex-bourbon hogshead, and bottled 19 years later at 52.1% without coloring or chill filtration.

Thanks to Dave McEldowney of PDXWhisky for letting me sample this whisky. 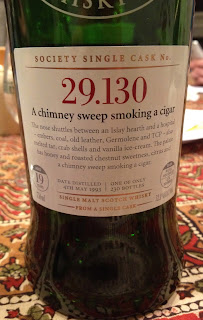 This is exactly what I want out of older Laphroaig. While the spirit has mellowed slightly, its inherent character has not been diminished by the cask, but rather accented. The nose is complex and engaging while the flavors evolve over the palate from brighter sweetness towards darker bittersweet flavors of peat and oak. Sadly this expression is long gone and teenage Laphroaigs have gotten wildly expensive, so it's hard to find anything comparable that doesn't cost crazy money. But it is good to see that older Laphroaigs, unlike the OB 18 Year, don't necessarily have to be soft.
Posted by Jordan at 8:11 AM