Back in the early-2000s Balvenie helped to establish its whisky geek bonafides by releasing a large number of experiments, ranging from cask finishes to different production methods. Sherry Oak was one of the simpler experiments, which is pretty clear from its name.

This whisky was aged in first-fill oloroso sherry casks, then bottled at 43% with chill filtration and maybe a little coloring (though I suspect that it didn't need much, if any).

Thanks to PDXWhisky for this sample. 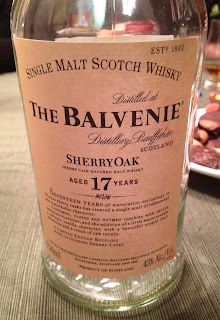 Nose: dark, condensed sherry, juicy raisins, a charred edge, somewhat cardboard-y oak, a little nutmeg, vanilla, slightly floral. After adding a few drops of water the malt becomes more clear and has a nice lightly musty character, the sherry is lighter and less dank, a healthy dose of caramel comes out, and the oak is more clearly American.

Taste: sherry and malt sweetness up front, quickly turning bittersweet as the sherry becomes dominant, apple and pear overtones with a bit of orange peel around the middle, surprising lack of oak until the very back. After dilution it resolves more clearly, it becomes maltier and less overtly sherried, the citrus in the middle is more clear and the fruit notes expand.

I think this sample is starting to give up the ghost. Given that I got the last pour from the end of a bottle that had already been open for goodness knows how long, I can't say I'm surprised. I can see how it might have been better before air and time brought in their wrecking crew, but I have a feeling that the newer 15 Year Single Barrel sherry casks are probably on roughly the same level, with the added benefit of being bottled at a higher strength and still being available.
Posted by Jordan at 7:30 AM