Kilchoman remains Islay's youngest active distillery, despite the numerous proposed new distilleries being built on the island. While they began their releases with a series of seasonal releases that charted the development of their spirit, that changed when Machir Bay became their first regular release. It was initially composed entirely from ex-bourbon cask whisky that was five years old or less, with a small proportion finished in ex-sherry casks. More recently they have stopped stating the age of the components and the exact treatments they get, but it is made from 80% ex-bourbon casks and 20% ex-sherry casks. While they have whisky that is over ten years old now, it is likely that what goes into this release remains largely or entirely younger than that.

As with all of Kilchoman's entry level malts, this is of indeterminate age and was bottled at 46% without coloring or chill filtration.

I purchased this miniature locally 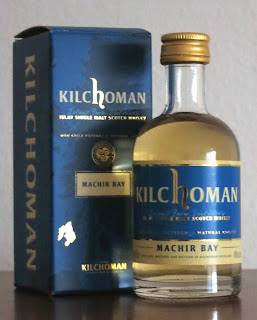 Taste: mildly sweet malt with a touch of sherry up front, becomes bittersweet with oak tannins and rising peat smoke in the middle, some alcohol heat at the back. After dilution the peat gets stronger and moves forward on the palate, the sherry sweetness is stronger and extends further back, some seashore notes comes out around the middle, and the oak tannins mostly disappear going into the finish.

Hey, that's pretty good. There was less cured meat on the nose and the peat was better integrated on the palate in this version compared to the first edition I tried, but otherwise it felt pretty consistent. I suspect that some of this is that Kilchoman now has older stock to blend into this release, so it comes off as less fiery than the version that was composed from 95% whiskies that were four years old or less.

Overall, I think this remains the standard by which all other Kilchoman releases are measured, much like Ardbeg's 10 Year is for that distillery. And as with them, the question Machir Bay always raises is whether the more expensive releases are enough better to justify their price tags.
Posted by Jordan at 7:30 AM