Loch Gorm is the third member of Kilchoman's standard lineup. It was brought in to rotation in 2013, replacing the more generically named Sherry Cask Release. As that suggests, this is the version aged entirely in ex-sherry casks, both butts and hogsheads.

As with all Kilchoman's standard releases, this is bottled at 46% without coloring or chill filtration. The whisky was distilled in 2010 and bottled in 2015.

I purchased this sample from WhiskySite.nl 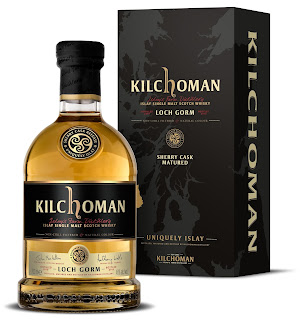 Nose: rich but not overwhelming sherry, clean malt, gingerbread, dry mossy peat smoke, fresh ground coffee, vanilla, American oak, seashells/minerals, a little salinity. After adding a few drops of water it loses most of its intensity, leaving mostly soft sherry and peat, though some of it reemerges alongside savory and lemon notes with time.

Taste: fairly sweet up front with some heat that carries through, fades through oxidized bittersweet sherry into light American oak and peat at the back. After dilution it gains some intensity but with less heat - the sherry expands towards the front and becomes brighter, the peat at the back is stronger and lingers longer.

This is a bit more like it. Despite being aged exclusively in sherry casks, I find that element better integrated here than in Sanaig. Importantly the peat smoke is also more present, which helps to give the whisky a better balance.

With that said, the aromas are clearly the star of the show at full strength. They have great intensity and a respectable amount of complexity. The flavors and finish are more than a bit of a letdown in comparison. I couldn't find much complexity and the finish just gave up. I was also surprised by the heat, despite the not especially high bottling proof. That may be down to the young-ish spirit going into this compared to Machir Bay, but without any definite explanation of how they're composed, that's just conjecture.

Water largely flips that relationship, though it doesn't bring much more complexity to the flavors.

Overall this reinforce my sense that Machir Bay is the only Kilchoman that can be described as a good value. Others might be better, but given how much more you'll pay for them I can't in good faith recommend spending your money when there's so much quality to be had from their entry-level whisky. Hopefully someday they'll be able to have range where everything justifies its price point, but we're not there right now. I wouldn't say no if someone gave me a bottle... but I won't be spending my own money on it.
Posted by Jordan at 7:30 AM