While I have tried a verdelho or two before, most of my madeira experience has been firmly between malmseys and buals. I was really curious to see how this one would stand up, especially after the rather tart sercial 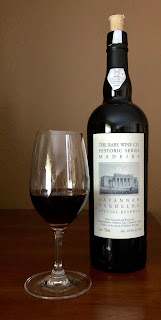 While not as dry as sercial, it has less residual sugar than a bual and much less than a malmsey. This wine is fermented to more than 50 g of residual sugar per liter, fortified, and aged in oak in a traditional canteiro system. The blend is put together from 85% verdelho grapes aged for 15-20 years with 15% tinta negra mole grapes aged for 40-60 years, then bottled at 19.5% ABV.

Taste: bright and balanced grape sweetness with vinegar and citrus tartness up front, becomes thicker and more molasses-y with fresh berries and apples plus a touch of vanilla around the middle, then a relatively clean apple tart fade out at the back

While still not particularly sweet overall, this is much more approachable than the sercial and will probably appeal to fans of medium dry amontillado sherries. I'd be happy to reach for it, especially as an aperitif because the tartness makes it nice before a meal without being too puckering. While not the most complex madeira I've tried, this is still a quality product that justifies its price point reasonably well. And, unlike some of the more impressive colheitas I've had, this should be pretty widely available.
Posted by Jordan at 7:30 AM