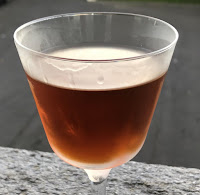 This is a really great twist on the classic Boulevardier. The allspice plays rather well with the rye, pushing it even further in a spicy direction and counterbalancing the sweetness of the Campari and vermouth. At the same time, I think this works well with a barely legal rye like Wild Turkey, because the more herbal/pickle notes of an MGP rye might not mesh as well.
Posted by Jordan at 10:36 AM