What more is there to say about this bourbon that hasn't been said before? One of the classics of the American market, it has become even more popular lately as the prices for new releases and once dependable staples have risen precipitously while Turkey has remained affordable. 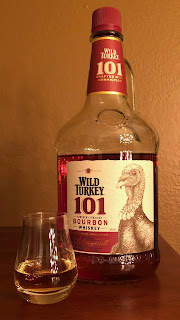 I've reviewed this one before from a miniature, so maybe it's appropriate that I'm now going in the other direction by reviewing it from a handle. They were under $40 at my local Trader Joe's a while back, which was a deal I couldn't pass up. It's largely gone into cocktails since then, but it also feels important to see what it's like neat.

Taste: barrel, grain, and alcohol sweetness up front, big berries and raisins in the middle, fading into moderately hot but not overly tannic oak with a touch of rye at the back. After dilution the heat fades a bit, the berry notes in the middle massively expand, and the oak is less tannic.

Finish: a hot mix of corn, rye, berries, and oak

Well, nothing overly complex, but a solid example of a medium rye bourbon. While it comes off as a bit hotter now, the strong berry notes are enough to keep me engaged. More complexity would be welcome, but my expectations are calibrated by the price. With so many American whiskeys of dubious value rolling out, it's comforting to know that something decent can be had without splashing out a ton of money. 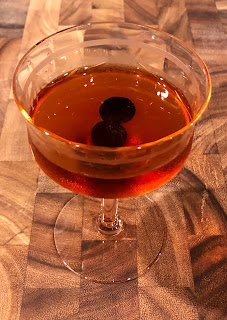 Combine all ingredients, stir with ice for fifteen seconds, then strain into a chilled coupe. Garnish with cocktail cherries (and a splash of syrup if you want a sweeter drink).

The nose is dominated by the bourbon's oak, plus some flashes of aromatic bitters and mint from the amaro. The sip opens with bourbon and amaro sweetness, then fades into an herbal cola bittersweetness at the back. The finish is balanced between oak, bitterness, and herbal dark cherry notes.

I made this drink two different ways - once with a 3:1 ratio and once with a 2:1 ratio. The former was rather lean and even more oak driven, good for folks who like their Manhattans dry. The cherry syrup almost felt necessary just to give it some body. The 2:1 version is much more plush and approachable, though it will depend a lot on which amaro you use. I ended up using Lucano because that seemed like the closest thing I had to Averna. It'd be fun to try with something more assertive like Ramazzotti, but you could also go with something easier like Cynar. Overall I'm a fan, though I felt like it needed to warm up a bit before I got the full flavor.
Posted by Jordan at 10:08 AM