Book Review: Punch - the Delights of the Flowing Bowl 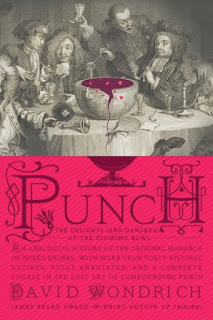 Where did cocktails emerge from? To find out, David Wondrich takes us back to the proto-cocktail - punch.

Distilled spirits became available for public consumption near the end of the 14th century, having previously been restricted to the domain of alchemists, apothecaries, and monks. However, early distilled spirits were often of poor quality - distillation techniques had not been refined, which meant that significant quantities of volatile chemicals like methanol and acetone, as well as heavier fusil oils remained in the final products. These spirits were rather harsh to drink on their own - remaining primarily a method for getting drunk, fast, and producing an absolutely atrocious hangover the next morning. While there were often tinctures made by soaking herbs and spices in spirits, as the higher proof allowed for greater extraction than fermented wine or beer, these were primarily seen as medical products, not a tipple to enjoy of an evening.

However, a new use was found for spirits due the burgeoning international trade beginning to flow into Europe at the end of the 17th century. Most importantly, trade with with Asia was expanding - the Dutch East India Company (VOC) was in its heyday and the British East India Company was growing as well. This meant that exotic spices and fruits were becoming more common in Europe, especially in the hands of the upper classes. This set the stage for the creation of punch.

Wondrich takes the reader through the pre-history of punch, then goes on to describe how it evolved over the centuries, trickling down to be the drink of more common men as well as the upper classes. Read about how much punch George Washington budgeted for serving to constituents while running for the Virginia House of Burgesses or how the coffee house culture of Enlightenment London was turned on to punch, sparking drunken discussions (and brawls) between some of the most notable men of the day. Punch was ascendent for almost two centuries until it was overtaken in the 19th century by the American innovation of the cocktail - a small, personal, bracing punch that could be drunk quickly instead of sitting with ones compatriots around the flowing bowl.

Throughout the book, there are recipes in their original state, which are also translated into more comprehensible modern measurements. Punch-making details are provided, such as how to make a proper oleo-saccrum (extracting citrus oils into sugar). This is a fantastic read, making a rather esoteric subject entertaining and enthralling. I highly recommend this book, especially for those of a booze nerd-y disposition. 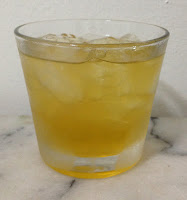 Build over ice. Stir to combine and dust a little nutmeg on top.

The sip begins with mild sweetness, which carries through in balance with the lime. The funky notes of arrack and rum are smoothed out a bit by the cognac, while the soda water provides a bit of snap. Over time, the nutmeg filters into the drink.

This is possibly the ur-punch, being composed of ingredients that would have been available to members of the British East India Company stationed at their fortress in Bombay. The original version was made exclusively with Batavia arrack along with nutmeg from the Dutch East Indies, as well as locally-souced limes and palm sugar. However, splitting the base spirit with strong Jamaican rum and mellow cognac gives it even more depth. The soda water isn't really in keeping with the original (soda water wasn't invented until the late 18th century), but I find it adds a nice something to the drink that you won't get with less fizzy water. This punch is quite a crowd-pleaser - I've served it to people ranging from members of my lab to my own family and friends, always with great results.
Posted by Jordan at 8:07 AM