Cockspur is a Bajan rum company founded in 1884 by a Dutch sailor, Valdemar Hanschell and located right on the beach north of Barbados' capital Bridgetown. The company was passed off to the Stade brothers, who installed a continuous still alongside the company's original pot still. While less well known than Mount Gay, the other big distillery on Barbados, Cockspur puts out solid products at very reasonable prices.

Taste: caramel sweetness builds from the front, a bit of muddled berries mid-palate, very light oak tannins and pepper near the back. After dilution, the sweetness becomes more like simple sucrose, which is also a bit overwhelming.

Cockspur 12 (it never actually says 'year' on the label) is a blend of 8, 10, and 12 year old rums. For as old as this rum is, I suspect that it is mostly made from rums aged in refill barrels, though they claim to use both ex-bourbon and fresh oak barrels. The rum has clearly been impacted by oak, with the strong caramel and vanilla notes, but there is very little of the tannic quality one finds in a lot of long-aged rums (which would be especially evident from new oak barrels). I find it very comparable to Cruzan Single Barrel, both in terms of flavors and price. However, Cockspur 12 gains an edge by having more natural flavors than Cruzan, the latter of which is slightly marred by an artificial cast to its vanilla notes. So if you're looking for a sweeter, easy sipping rum, Cockspur 12 is going to be a very good choice. It's also a solid value, usually retailing for under $30. With a bit more complexity it would be elevated in my estimation, but it does what it does very well. 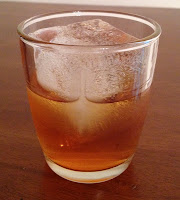 While not the most complex drink, the ingredients add to the rum without overwhelming it. Quite a satisfying sipper.
Posted by Jordan at 9:21 AM