Smith & Cross is one of those rums that was simply unavailable in the States before the cocktail renaissance. Thankfully Eric Seed of Haus Alpenz has made it his mission to bring forgotten spirits back to the light of day.

The Smith & Cross name traces its history back to 1788 when a sugar refinery was set up at No. 203 Thames Street near the London Docks. Eventually the company became a major importer of Jamaican rum. More recently, the space was taken over by Hayman Distillers, which produces a number of spirits that are also imported by Haus Alpenz.

The current iteration of Smith & Cross rum is produced by the Jamaican distiller Hampden Estate. The distillery normally produces high ester rum on contract, both for blending, as well as for food and perfumes. Smith & Cross is roughly an even blend of Wedderburn high ester (200+ ppm) rum, which is aged for less than a year, and Plummer medium ester (150-200 ppm) rum, which is aged for 18-36 months. High ester rums seem to be like heavily peated whiskies - age tends to diminish their power, so you want something young for full effect. Additionally, Smith & Cross is bottled at 57% ABV, which is also known as 100 English proof (50% alcohol by mass) or Navy proof (the English Navy required all spirits on board to be of sufficiently high proof that gun powder would still light if the spirit was spilled on it) While this rum is primarily designed for making cocktails, it's still a fantastic sipper.

Nose: dry esters, nutmeg, caramel, berries, a bit of vanilla, dusty oak, brandy, coffe. After adding a few drops of water, the ester and caramel aromas become more integrated, with more berries and vanilla along with the appearance of nougat.

Taste: very rich overall, mild molasses sweetness starts up front and carries through, esters, berries, and pepper explode mid-palate, then fade a bit into the finish. After dilution, there is a thicker mouthfeel, more integrated flavors and additional sweetness up front and bitterness at the back.

It's a little bit weird given that Smith & Cross was put together explicitly for making cocktails, but this is honestly one of my favorite sipping rums. Part of it is that the flavors are very robust - no need to hunt for details because everything is clear and upfront. There's also excellent balance on the palate - the sip begins with pleasant but not overwhelming sweetness, then swings almost 180º into dry esters and pepper. That switch reminds me a lot of Highland Park 12.

Which leads me to wonder what a high ester Jamaican rum would taste like matured for 2-3 years in ex-sherry barrels (amontillado would be my first choice, but you could drag it in either a drier or sweeter direction with either fino or oloroso casks). I feel like there might be an untapped market in appealing to the extremophile tastes of peat connoisseurs with well-made, lightly aged Jamaican rums.

I've already brought out Smith & Cross for a number of different cocktails, including Mai Tais, the Ashtray Heart, and Montego Bay. But I thought that it might fit nicely into the Boulevardier/Negroni mold... 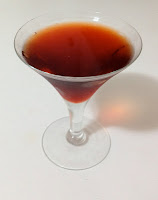 The nose still has a strong hit of esters, but they've been smoothed out a bit. There are also some lovely fruit notes from the Campari and vermouth. The sip begins with almost syrupy sweetness, segueing into a blaster of esters, fruit, bitterness, and spice, which all continue through the finish with a long, slow fade.

While not precisely complex, this is simply a beautiful cocktail. Everything fits together perfectly, the esters layering on top of the combined bitter notes from the Campari and vermouth. While initially sweet, the finish is anything but, keeping the drink from being cloying. I highly recommend this variation if you're used to the more standard Boulevardier or Negroni.
Posted by Jordan at 8:02 AM