Oronoco was, in a sense, the first rum I ever bought. I say 'in a sense' because it's actually a blend of Brazilian cachaça and aged Venezuelan rum. As I came into the world of rum via cachaça, this was my bridge.

From what I can gather, the cachaça portion of the blend is produced from fresh sugar cane, which is fermented and then distilled in a mix of copper pot stills and continuous stills, for a total of three distillations. The cachaça and Venezuelan rum are married together in Brazilian Amendam hardwood casks, adding another unique layer to the product. The spirit is then diluted down to the standard 40% ABV for bottling. The bottle is definitely eye-catching, with a big leather map of Brazil wrapped around it (being a good resident of the PNW, I do wonder what the recycling people will think when I finally get rid of the bottle).

If you want to read more of the history behind the producers, it's written up here. It's surprisingly difficult to find solid information, as there isn't even a proper product website these days, just a Facebook page (that's nearly a ghost town). While there was a lot of hype in the mid-2000s around this rum, the lack of information doesn't speak well for its sales.

Nose: strong vegetal notes, berries, apple blossoms (though a bit artificial like hand soap), bubblegum, light coffee, cream, earthy vanilla. After adding a few drops of water it becomes creamier, with the vanilla dominating even more, while retaining a cachaça edge, and gaining a bit of pineapple.

Taste: light, creamy alcohol, sugarcane sweetness and grassiness, pepper kick mid-palate, bitter towards the back. After dilution the bitterness is more pervasive, but more in balance, due to the sweetness extending further back along with a healthy dose of vanilla.

I can see why this tickles some people's fancy, but it just doesn't do too much for me now. The cachaça and Venezuelan rum components seem to form layers rather than an integrated whole, making for a slightly unsettling experience.

What I really can't tell is what kind of consumer this is aimed at. The MSRP is rather high for a white rum, usually running around $30 a bottle (which is a price-point where you can get a lot of nice rums). The copy on the bottle is rather confusing, simultaneously claiming that "the cane has an intensity of flavor and complexity leading to a rum with a light smooth flavor". The two halves of those statement are almost diametrically opposed. That does seem like the fundamental flaw - the producers couldn't decide whether they would rather emphasize the unique funky flavors of cachaça or the smooth vanilla of Venezuelan rum. In trying to split the difference, I'm not sure they accomplished either. It's got too much going on to pull in vodka drinkers, but not enough to satisfy those looking for a robust rum. This saddens me, because I think they could have had something really interesting on their hands if they had gone full-bore on flavor instead of trying to make it a white rum. However, that's just my opinion and you can find other reviewers singing its praises, so it seems to have hit the mark for some people (though not Cap'n Jimbo).

So how does it fare in cocktails? In a standard daiquiri, the nose is rather flat, with just a hint of grassy vanilla. The sip begins lightly, with flavors of lime, cane, light coffee, and vanilla building towards the back. The finish is peculiarly bitter, but still light It's a rather unique experience that I haven't found in any other rum. I think I would appreciate this more on a warm day that in the middle of winter, as it presents a daiquiri on the lighter side without being insipid. It also might work better in a caipirinha, where the lime oils from the lime shell would give it a bit more dimension. 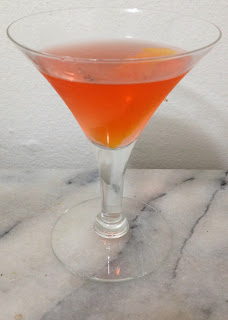 The nose is very vegetal/herbal, a melange of the rum and liqueur, with floral vanilla. The sip is bittersweet, continuing through mid-palate. The flavors are in turn herbal- and coffee-centric, with orange wending its way through and a very smooth mouthfeel. The finish is bitter, split between the rum, Luxardo, and orange bitters.

Even with all those flavors, the overall effect - like the appearance - is fairly light. The Luxardo and Bénédictine accent the rum's flavors without overwhelming them. This would be a fairly good pre-meal cocktail as the various bitter ingredients give it something of a palate-cleansing effect. It might be even better as a highball and with the soda water helping to balance out the sugar.

I think this rum works much better in cocktails, where depth can be added via other ingredients. However, for the money there are just better options. Banks 5 Island has much more richness and depth, while still retaining white rum crispness, for a fair bit less cash.
Posted by Jordan at 11:56 AM