I began my time at Bowmore with a tasting. Probably should have done it the other way around, but so it goes. 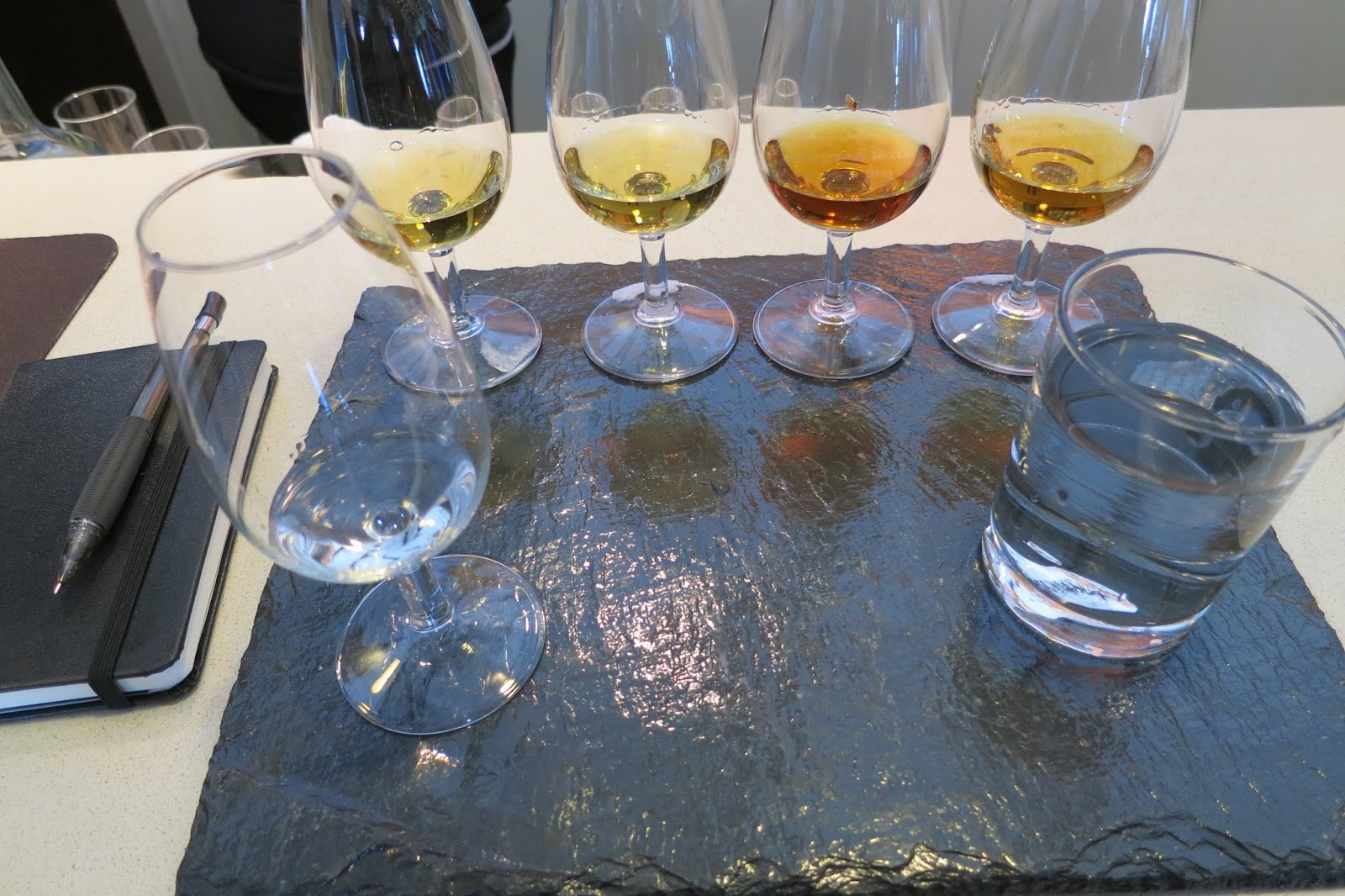 The tasting was done roughly by age, beginning with new make and working up. Thankfully all but one of the drams on offer was new to me.

This was... not good. Especially in comparison to Lagavulin's new make, Bowmore's was downright disgusting. Kind of hard to see how this becomes good whisky, but oak and time work wonders.

Nose: a lot of new make character, malty, very light peat, hay, a touch of vanilla, a little chocolate. With water there is more malt and vanilla plus creamier peat.

Taste: thin and watery, a little bourbon barrel/malt sweetness up front, light caramel, very green with light oak tannins at the back. After adding water, it becomes much sweeter, but the oak loses whatever heft it had before.

Despite the name, this is designed to be a lighter Bowmore expression to complement their Legend expression. Despite the general trend of younger peated whiskies being more robust than their older peers, this one was extremely subdued, verging on boring. But that's what happens when a whisky is built to a price point.

Taste: lots of sweet bourbon notes up front, rich caramel, vegetal, creamy malt, oak and peat are entwined at the back, herbal. With water, there is more citrus, malt, and earthy peat, while some seaweed and pepper come out.

This was more like it. Tempest is made entirely from whisky matured in first-fill bourbon casks for ten years, then bottled in batches. While following the current trend of 'sweet & peaty sells', this is one of the better whiskies I've tried from Bowmore. I could have done with a bit more smoke, but the cask strength (well, batch strength) helped to remedy Bowmore's usual flaw - lack of punch. If it weren't for the fact that the comparable US bottling - Dorus Ur - is at a ridiculously high price point, I'd already own a bottle. At $60-65, like it is in the UK, this would be a huge winner. At $100, there are a lot of better options out there.

Taste: big sherry up front, malty/bourbon sweetness underneath, peat/oak/pepper takes a while to develop

This was the reference standard for the tasting, as I had tried it before. And I felt about the same - it's alright, but the sherry felt a bit too heavy and the low bottling strength keeps it from being punchy enough. Still I wouldn't say no to a dram if offered.

Nose: plastic-y malt/vanilla, caramel/toffee, still a bit green, a hint of sherry and peat, rather salty/maritime, more peat with time

While still understrength, I felt like this was a significant improvement over the 18 Year. The two are mirror images in terms of construction - both are mixes of bourbon and sherry casks, but the 17 Year has a greater proportion of bourbon barrels while the 18 Year has more sherry. I think bourbon casks let Bowmore's salty/maritime character shine more, with the sherry casks playing a supporting rather than dominant role. I picked up a mini pack containing the 17 Year, so I look forward to retasting it. 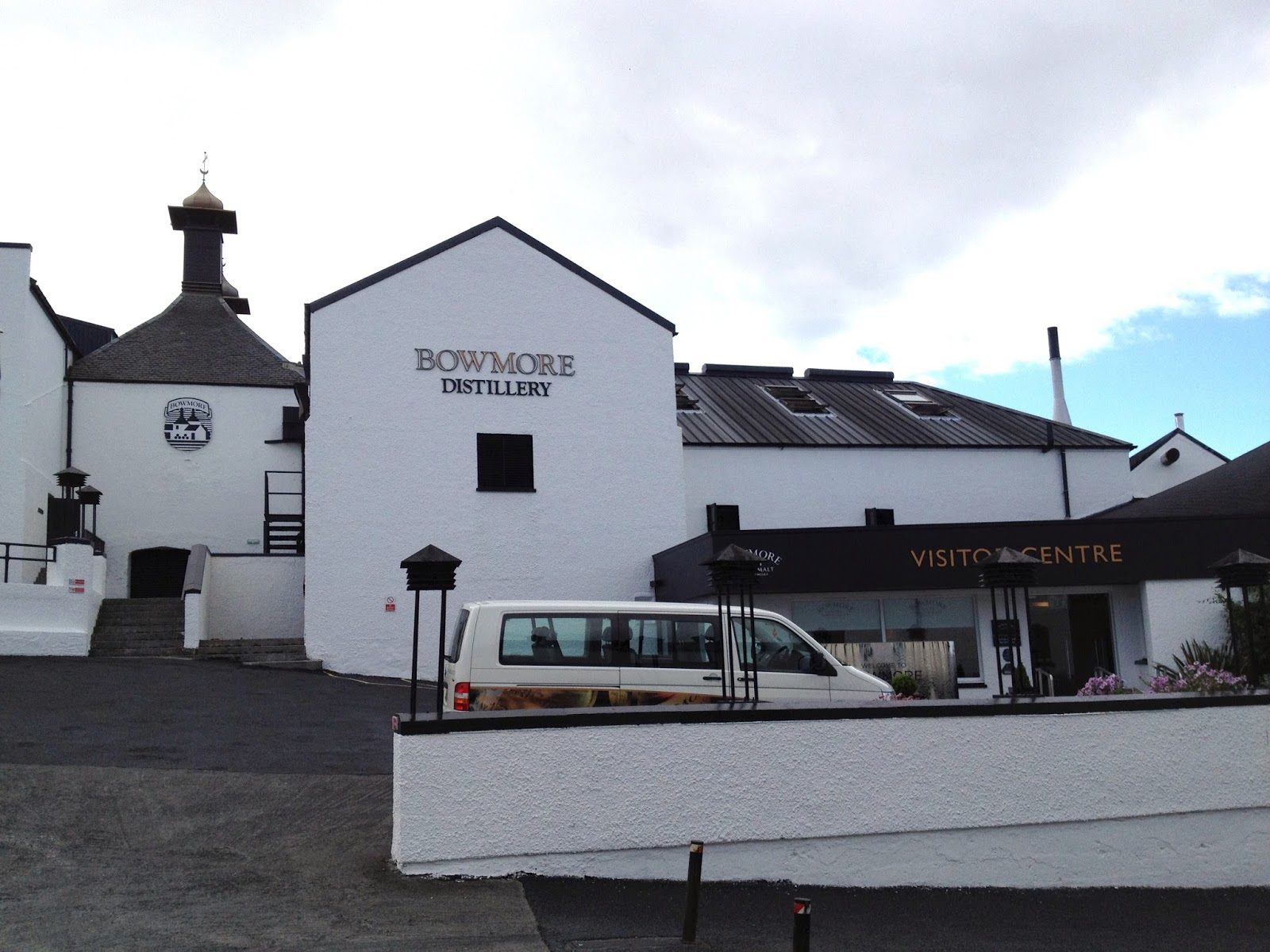 While the tasting was nice and reasonably priced at £18, it could have been a lot better. Admittedly I was spoiled by Lagavulin - tasting casks from the warehouse would have been a lot better than a handful of whiskies that I could buy off the shelf. I had come all the way to the distillery, so I really wanted something more. But it was still a good experience.
Posted by Jordan at 8:02 AM