Some of the most anticipated bottles from Talisker over the last decade have been the roughly annual releases of their 25 Year Old whisky. While most well-known for the fiery 10 Year, these older whiskies represent the distillery burnished with age. All of the casks used in the 25 Year are refill ex-bourbon and ex-sherry casks, which should keep the spirit from being completely overwhelmed by oak. While traditionally bottled at cask strength (batch strength, really, but that's semantics), the 2011 and 2012 releases of Talisker 25 Year changed, opted instead for the distillery's standard 45.8% ABV. This particular is bottle #5883 of 6318 from the 2012 release. That represents less than half the outturn of the 2005 release; considering that it was reduced from cask strength and given demand for old whiskies these days, that says a lot about the distillery's thinning stocks. No wonder their latest releases have all been NAS. 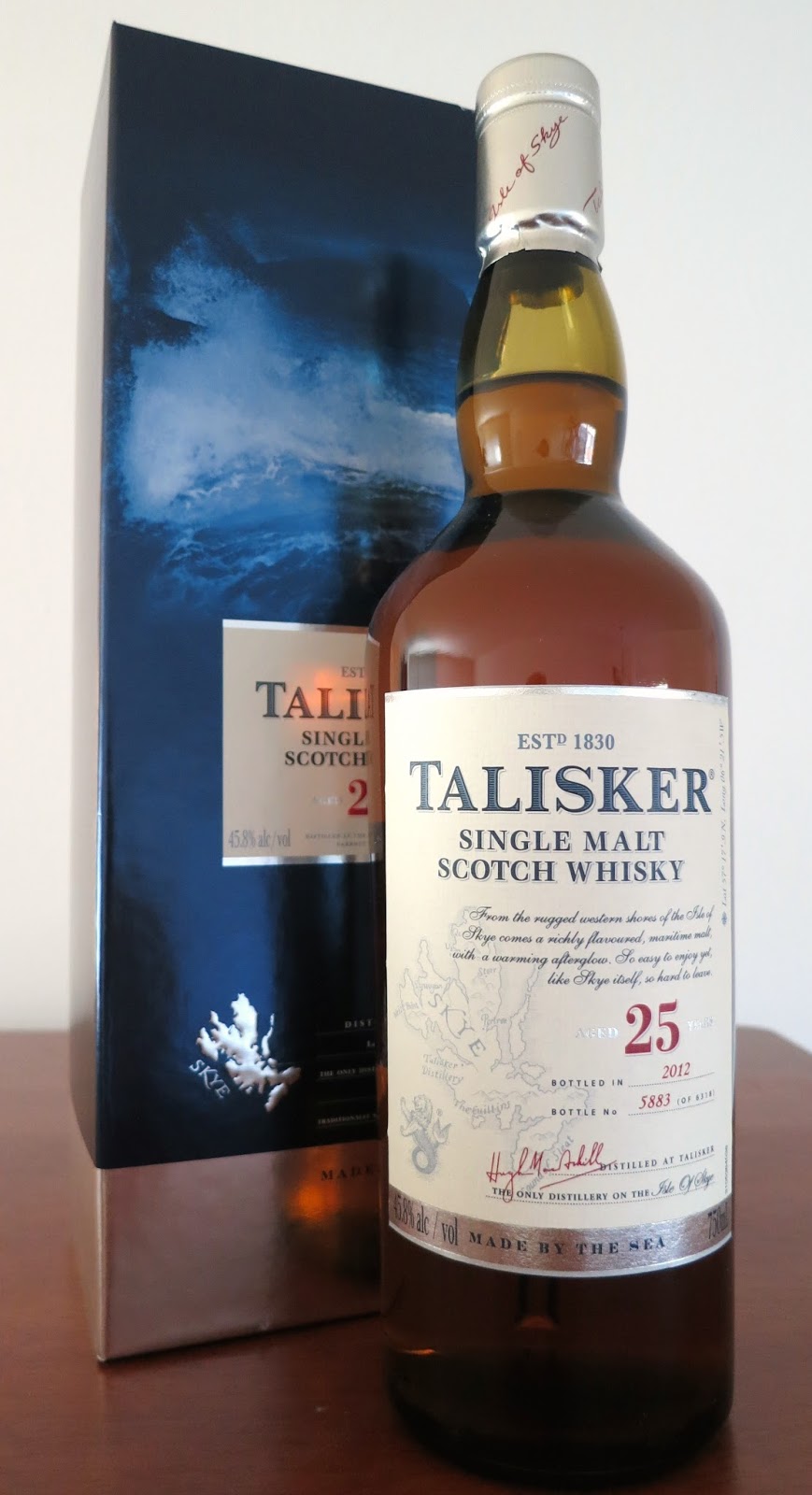 Nose: floral perfume over rich caramel, red wine and dank (reduced raisin syrup) sherry over a solid malt core, well-integrated (but slightly sour) peat and wood smoke, barrel char and vanilla, tired oak, used tea leaves, hints of cured meat, some seaweed/seashore. After adding a few drops of water, the malt comes to the fore, with a certain cardboard-y quality to the oak that reinforces my sense that the casks are tired, the sherry and cured meat hang in the background, but the peat has faded and integrated substantially, with some strange herbal/vegetal notes appearing, and maritime saltiness and barbecue sauces notes finally showing up.

Taste: sherry and malt sweetness up front, becoming drier but more malty further back, which is joined by Talisker pepper, mocha, and tired oak, with a suggestion of peat and more dark chocolate at the end. After dilution, it gets a bit watery, with malt and wood sweetness (drifting towards pure cane sugar) dominating, a thread of sherry dances through the palate (with growing intensity after some time in the glass), and there are more tannins at the back, with the peat becoming kind of muddy.

I think I would have appreciated this whisky better without the context of other Taliskers. I'm sad to say that I don't find this substantially better than the Talisker 10 Year I reviewed a couple of years ago. While much of the youthful vigor has been lost, it's hard to say what has been gained from the extra fifteen years in oak. The floral notes, while nice, weren't out of line with what I found in the 2000/2011 Talisker Distiller's Edition, so it doesn't necessarily take a lot of time to acquire those aromas. The cask selection doesn't seem to be top-notch, as the oak has that tired, somewhat cardboard-y character. In reducing the bottling proof since the 2011 release, it seems like the flavors have been flattened. It may also be that it's even been chill-filtered and colored (when a Diageo product doesn't say otherwise, I usually assume that it is). This may give it broader appeal, but also makes it a less than wholly satisfying experience for the amount of money Diageo wants for it these days.

While I was quite looking forward to trying an older Talisker, I am extremely thankful to have bought this on sale (~$150) and to have split it with a number of other people (you can find MAO's review here and hopefully Michael will post one soon) - I can handle disappointment when I only had to pay for a quarter of the bottle. Between the 25 Year and Talisker Dark Storm, the distillery does not seem to be putting out winners lately.
Posted by Jordan at 7:51 AM