Kilchoman is the newest distillery on Islay, opened in 2005. It is also the smallest, with an output of only ~100,000 liters per year, roughly 10% the output of the next smallest distillery, Bunnahabhain. Kilchoman thus has to market itself in terms of craftsmanship and attention to detail. The distillery has its own working farm, which provides barley for their floor maltings (they're one of half a dozen distilleries that do their own malting). With that said, they still buy a lot of their malt from Port Ellen like most of the distilleries on the island, reserving their own maltings largely for their 100% Islay releases. Their stills are also about 10-20% the size of more standard stills on the island, which explains their comparatively low output. Right now most of their casks are first fill - ex-bourbon casks from Buffalo Trace and ex-oloroso sherry from Miguel Martin. These are unsurprising choices as first fill casks will impart flavor more quickly than second or third fill casks - the distillery would like their whisky to mature quickly so that it can be bottled at a relatively young age (scotch whisky must spend at least three years in oak before it can be bottled as 'whisky'). In keeping with their craft ethos, all of their whiskies are bottled at 46% ABV or more without chill filtration or coloring.

Since Kilchoman is such a new distillery, they've been taking an interesting route for their releases - up until this year, they put out a new bottling every season, so that fans could experience how the spirit was maturing. Only within the last year have they started to put out 5 year old age-dated releases. Machir Bay is supposed to be Kilchoman's first regular release, now that they have sufficient aged stock to put out similar bottlings on a regular basis. 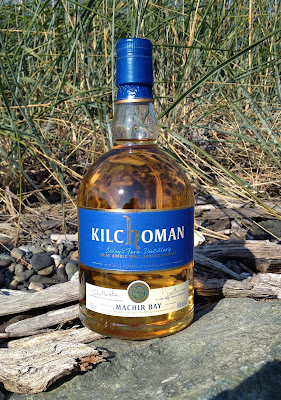 Taste: thin, sugary sweetness up front, a wash of sherry, dirty lemons, peat swiftly moves in with smoke, ash, and vegetal notes along with a very strong, sharp note of anise or licorice that carries all the way into the finish, a flash of bittersweet chocolate, then a bit of earthy barnyard, TCP and black pepper come in further back. After dilution, the palate becomes creamier and more integrated.

Machir Bay is a blend of ex-bourbon cask 60% 3 year old, 35% 4 year old, and 5% five year old whisky, which are then vatted and aged in oloroso sherry butts for 8 weeks. The result is surprisingly mature for its age, without any of the green-ish notes or overly aggressive alcohol that one tends to associate with young single malts. My hat goes off to the distillery team for putting together a product that has matured so well, so quickly. With that said, the peat is still the focus, its fires undimmed by the brief time in oak. Unlike Longrow CV, the other younger peated whisky I've tried, Machir Bay is much more on the smoky/ashy end of the peat spectrum, compared to the Longrow which seemed very fresh and vegetal. It really does seem to be a product of its place, strongly reminding me of a bonfire on the beach. Initially I found the anise/licorice notes to be rather strong, which was slightly dissonant to my palate, but thankfully they settled down after the bottle was open for a few weeks. Finding anise notes at all may just be a matter of my sensorium, as Michael Kravitz didn't notice anything of the sort in his review. But either way, if you find Machir Bay a little off-putting at first, I'd give the bottle a little time to settle down before rendering a final judgement.

As a value proposition, this one is a little bit tricky. It is undoubtably young, but the price is up in the same territory as a lot of good whiskies that are 3-4x its age. On the other hand, it's also just as tasty and you get the benefit of supporting a new distillery and seeing what they can do, just as it starts to hit its stride. I'll definitely be looking forward to seeing what Kilchoman puts out over the next 5-6 years as the approach the point of being able to put out a more standard 10 year old whisky. I'm also a bit tempted to step up to their more expensive Sherry Cask release, which might help to temper some of the fiery peat. Overall, a worthwhile dram, especially for peat-heads.
Posted by Jordan at 9:57 AM