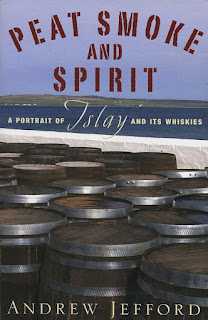 Islay is one of the most well-known regions of scotch whisky production. The products of the island are very much 'love it or hate it', so it evinces some strong emotions.

Andrew Jefford's book is a chronicle both of the island and the distilleries that have made it famous. He clearly has a love for the island and made numerous trips to learn about the place. Importantly, he doesn't appear to have any particular biases towards or against any of the distilleries, appreciating each equally for what they have to offer.

Each chapter is broken up into two parts - first, a section looking at a historical period or feature (weather, terrain, etc.) of the island, then an overview of one of the island's distilleries.

The historical sections are very in depth, ranging from geologic (the island is composed of two landmasses that came together via tectonic drift), to the Medieval (the island was the seat of power for a Gaelic-Norse empire encompassing much of the western maritime Scotland), to the modern (the turbulent history of the 19th century). Admittedly I found these sections to be a bit much at times, as Jefford is rather... exhaustive. However, some of it, especially the sections on the 19th century, are useful for understanding the context in which many of the distilleries were created, but I found myself skipping large chunks after a certain point.

The sections about Islay's distilleries are an absolutely treasure-trove. Each is chock-full of history as well as first-hand experiences at the distilleries. Jefford makes a point of visiting the water sources for each distillery, both to get a sense of how they contribute to the whisky directly and the role they played in the distilleries' histories. There is also a vast amount of detail about the production methods each distillery uses, from the source of their malted barley, what kind of washbacks they use, the length of fermentation, the size, shape, and degree of filling of their stills, the shape and type of condenser attached to each of the stills, how long each distillation run takes and where cuts are made, and the conditions in which their whisky ages. While direct questions to the various master distillers about what makes each spirit unique were often met with negatives (I began to wonder what it was that actually made each distillery's product unique as the list of possibilities was officially whittled down significantly), Jefford does a lot to speculate what might make an impact (still shape and run dynamics seem to come out ahead). If you're ever wanted to know about the details of whisky production, this will provide you all sorts of information.

The book is especially interesting as it presents a snapshot of the distilleries in transition. The book was published in 2004, not long after the revival of Ardbeg and Bruichladdich, two of the island's most celebrated brands. Ardbeg had been under its new Glenmorangie/LVMH ownership for about seven years - long enough to start releasing new whiskies from their old stocks (the 17 year old and Uigeadail), but still new enough that their first bottles of 10 year old made from entirely new stocks were still in the future. Bruichladdich had been saved only a few years before the book was published and was still struggling to find its footing, throwing out a wild assortment of cask finished whiskies made from old stocks. Looking ahead, Kilchoman's foundation was still several years off. All of this is useful for someone who wants to understand the state of the scotch whisky industry in the 21st century.

Overall I think this is a very good book to read if you'd like to learn more about the history of Islay and its whisky. It's thorough, well-researched, and evinces a clear love for the place and its whisky. Highly recommended.
Posted by Jordan at 4:12 PM