While at the Great American Distiller's Festival here in Portland, one of the booths that caught my eye was serving up the spread from Bardstown Barrel Selections. While there, Dave Schmier served me everything their range of bourbon and rye whiskeys, which was quite educational. All of their whiskey is sourced from MGP (formerly LDI). However, as I didn't get to spend as much time as I like to with these spirits, my notes are more sketchy. 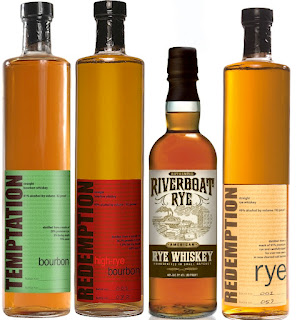 This is the medium rye recipe bourbon of their bunch, with a mash bill of 75% corn, 20% rye, and 5% malted barley. This is a rather young bourbon at only two years old and a fairly low bottling proof of 41%. While a perfectly decent bourbon, nothing about it really stood out to me. While LDI puts out solid juice and there are surprisingly few rough edges on this for being so young, there is also little to recommend it over other bourbons. Worth a try, but I won't be working to buy a bottle.

This is the high rye recipe bourbon, with a mash bill of 60% corn, 38% rye, and 2% malted barley. Redemption is the same age as Temptation, at roughly two years. However, it does get bottled at a higher 46%, which helps to give it more oomph. While I enjoyed it more, it's not good enough to recommend it over other high rye whiskeys like Old Grand Dad or Bulleit seeing as they're all around the same price.

This is the standard 95% rye/5% malted barley recipe from LDI, but aged for less than four years (if I remember correctly, it's closer to a year for most of the juice) bottled at 40%. This is meant to emulate what rye whiskey was like back in the 18th century, when aging in barrels was usually an incidental side-effect of transport. It is very clearly a young rye, with so much pine that it almost tastes like gin. For me it was more of an interesting experience than something I would want to drink regularly, but it might work better in cocktails.

This has the same mash bill as Riverboat Rye, but is aged for at least two years before bottling at 46%. It definitely shows more maturity than its younger sibling, but is still decidedly youthful. Again, not something I would be too keen to sip regularly (Rittenhouse BiB and Sazerac 6 do a much better job), but the higher proof means that it would be an even better choice for making cocktails.

As Chuck Cowdery pointed out, whiskeys like these are most likely bottled at a younger age specifically so that they can be balanced out by the other ingredients in cocktails, rather than having the internal balance necessary for sipping whiskeys. What might appear to be a defect from one perspective can be an asset from another.
Posted by Jordan at 10:50 AM